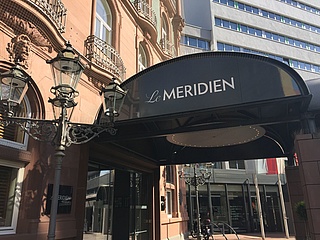 Something has happened in the indulgence area of Le M&eacute;ridien Frankfurt: With immediate effect, there is a new Food & Beverage Operations & Quality Manager in Pascal Renk (27). The graduated hotel business economist and trained hotel specialist knows his way around not only in this area, but also in the region. After all, he was most recently under contract as Assistant Food & Beverage Manager at the Delta Hotel by Marriott Frankfurt Offenbach, whose opening he accompanied and played a key role in shaping. For Le M&eacute;ridien Frankfurt - with The Legacy Bar & Grill restaurant and the ten banquet rooms for up to 300 people - Renk also already has concrete ideas: He wants to "create vibrant F&B areas" and "underline the uniqueness of the hotel with top service and top quality food and beverages." Le M&eacute;ridien Hotel Frankfurt is under the management of Munich Hotel Partners (MHP).

The self-confessed wine lover completed his training as a hotel manager in a small, family-run hotel in Bad Kreuznach. Afterwards, Pascal Renk moved to China, where he started his professional career as a Food & Beverage Management Trainee at the Hotel InterContinental Shenzhen. Back in Germany, stations as Chef de Rang at the Hilton Hotel Bonn and as F&B Assistant at the Crowne Plaza Heidelberg followed from 2012 onwards, before he successfully completed his studies in Hotel Business Administration at the renowned Hotel Management School Heidelberg in 2014. In the same year, the Asian hotel chain New Century signed him as Assistant Food & Beverage Manager, which opened its first hotel outside of China with the New Century Hotel Frankfurt Offenbach (now Delta Hotel by Marriott Frankfurt Offenbach).

The Le M&eacute;ridien Frankfurt, with 300 rooms and suites, is very centrally located in Frankfurt's Bahnhofsviertel, on Wiesenhüttenplatz, which is considered a hotspot for the gastro and nightlife scene and is expected to become increasingly attractive for the neighborhood in the coming years. The hotel is just a few minutes' walk from the main railway station and the banking and business district, the Museumsufer is within easy walking distance and the airport can be reached within 15 minutes by car. "History versus modernity" is the motto of the hotel, which consists of a modern part and a historic palace in neo-Renaissance style. In-location for casual fine dining with smoked and barbecue specialties is The Legacy Bar & Grill. The Giulia Super bar is also located in the same building. For meetings and events, the hotel offers ten function rooms in more than 600 square feet of space. The Le M&eacute;ridien Frankfurt realizes the group-wide art program "Unlock art" through a partnership with the Schirn Kunsthalle, one of Germany's top addresses for contemporary art. Le M&eacute;ridien Frankfurt is under the management of Munich Hotel Partners GmbH (MHP).