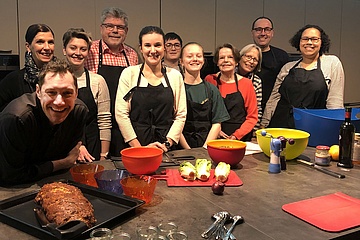 It started at the European level, and now 85 countries around the world are participating in International Rare Disease Day, which will be proclaimed for the twelfth time this year on 28 February 2019. The aim of this day is to inform the public about rare diseases through actions and events and to give a voice to those affected. The dsai e.V. is also participating in this together with dsai ambassador Mirko Reeh.

The patient organization for congenital immunodeficiencies and the Frankfurt-based TV chef organized a cooking event for their members to distract them for a few hours from their everyday life with the rare disease. People with a congenital immunodeficiency are particularly susceptible to infections - and can strengthen their immune system with a balanced diet, among other things.

Ten patients and members of dsai e.V. - Patient Organization for Congenital Immunodeficiencies joined Frankfurt-based TV chef Mirko Reeh at the stove to prepare dishes that meet their needs. "I am very pleased to be an ambassador for dsai. With my notoriety, I would like to contribute to bringing the topic of congenital immunodeficiencies even more into the public eye," said Mirko Reeh.

In people with a congenital immunodeficiency, the immune system does not function as it should: It lacks the necessary immune bodies to fight off pathogens. If this immune defect is not detected, these people suffer from recurrent, severe infections; a late diagnosis can have fatal consequences in the worst case. With certain medications, they can lead a largely normal life and also do not have to follow a special diet.

"A healthy diet is nevertheless very important for those affected," explains Gabriele Gründl, national chairwoman of dsai. "With them, the gastrointestinal tract is often the source of discomfort, with a balanced diet they can relieve symptoms such as diarrhea, nausea or vomiting and prevent damage to the intestine." Immunodeficiency patients should pay particular attention to an adequate supply of vitamin D: Among other things, it supports their defense against infections and controls autoimmunity.

Mirko Reeh gave the course participants dishes and recipes that are easy to recreate at home and enrich the daily menu. "Especially because of their susceptibility to gastrointestinal complaints, immunodeficiency patients should prefer a light, high-fiber cuisine that includes as many seasonal fruits and vegetables as possible," Reeh said.

Primary immunodeficiencies are, according to the current status, close to 400 monogenic diseases, which must be distinguished from each other by diagnostics. The correct diagnosis always causes problems in practice and is not infrequently made only after several unsuccessful attempts at therapy. "A large part of our work is dedicated to raising awareness about congenital immunodeficiencies, because the diagnosis rate is still very low: of an estimated 100,000 people affected, only 4.5 percent are diagnosed," explains Gabriele Gründl. "But of course we are first and foremost an organization that cares about the well-being of its members, and I am very pleased that Mirko has helped us with this cooking course to make everyday life for patients a little easier and also to enrich it."