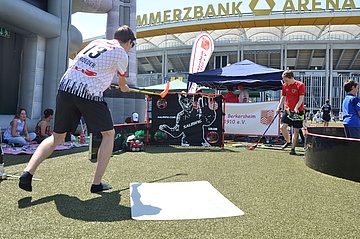 On Whit Monday, May 21, 2018, the popular Festival4Family at the Commerzbank Arena will go into the next round. Last year, the family festival attracted over 20,000 visitors from the entire Rhine-Main region with free admission. And this year, too, children's eyes in particular will light up when the stadium and the area around it are transformed into a giant amusement park. With the support of companies, institutions and associations, the Frankfurt Trifels Verlag has been putting on a festival that is unique in Germany in this form for seven years now.

On the main stage inside the Commerzbank Arena and also on the extensive outdoor area there are great presentation opportunities for sports clubs, musicians, entertainers and social institutions. Numerous dance groups, judo fighters, trampolinists and acrobats have thrilled audiences in previous years. Interested clubs can still apply until April 10 via email to <link>familienfest@trifels.de to participate in the major event.

"What the clubs in the region achieve, especially for children and young people, is exemplary," says Björn Fritsch, Head of Marketing and Project Manager of Festival4Family. "We are happy about all the active clubs that present their skills to families at the Festival4Family and show what makes our region so unique."

In 2018, the Festival4Family will again delight families with lots of fun, games and excitement, and also provide perfect entertainment with brand new highlights and star guests. Tobi Kämmerer from hr3 will host the colourful stage programme in the Commerzbank Arena and welcome numerous children's stars and show acts. With well over 100 hands-on activities and exhibitors, the Festival4Family is one of the largest family festivals in Germany. Together with many regional and national partners, the Festival4Family would like to draw attention to the rights of children.