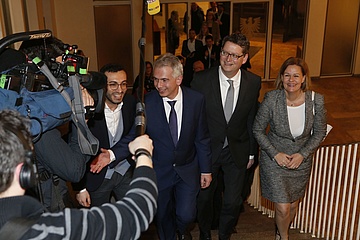 The victory was clear for Peter Feldmann. The incumbent was confirmed as Frankfurt's mayor with 70.8 percent of the vote in the runoff election against his challenger Bernadette Weyland. The re-election was already apparent in the clear margin during the first ballot two weeks ago, but Feldmann could only be sure about an hour after the polls closed, when it was clear that the victory could no longer be taken away from him. That was also clear to Weyland, who conceded defeat before the count ended and congratulated Feldmann on his victory.

Peter Feldmann was surprised by the very clear result and, after the announcement of the election results in the Römer, first said a few words of thanks: "I would like to thank all voters for their democratic commitment. My special thanks go to all the supporters and helpers who have worked tirelessly over the past weeks and months to make the entire city aware of the importance of direct elections to the office of Lord Mayor."

However, he also made it clear that he would continue his government program in his second term: "Core issues remain the expansion of subsidized housing, the creation of new, affordable housing, the extension of the rent freeze introduced at the municipal housing cooperative ABG to Nassauische Heimstätte, inexpensive local public transport, and the promotion of education and culture. Today's election results show that many Frankfurt residents demand the solutions I have outlined from the city government. A lot of work awaits the magistrate in the next six years, and we must tackle it together."

Despite all the reason to rejoice, however, there remains some disappointment at the historically low voter turnout. Only 30.2 percent of those who voted cast their ballots in this runoff election - a negative record for direct elections for mayor