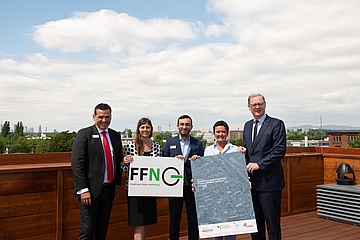 Location in East Frankfurt takes off with its own location initiative

(ffm) Developing the location according to ecological, economic and social criteria: Two years after the starting signal and the development work of the pilot project funded, among others, by the research programme "Experimental Housing and Urban Development" (ExWoSt), the "Sustainable Business Park Fechenheim-Nord/Seckbach" has drawn a first interim balance, presented plans for the future and presented the new location initiative FFN (FrankFurter Osten Nachhaltig) for the first time.

This means that the model project, which is unique in Germany and is being led by Wirtschaftsförderung Frankfurt GmbH in cooperation with the Energy Department and the Urban Planning Department with its own management, is entering the next phase. At the press briefing on 18 June at the site office in Cassellapark, Head of the Department of Economic Affairs Markus Frank said: "The idea of the Sustainable Industrial Estate is to make this diverse industrial site in the east of the city, which is not only one of the largest but also one of the oldest in the city, fit for the future, to create a unique position and to offer added value to the companies, owners and employees. But to make this happen, local stakeholders need to be involved. This development work has been done excellently over the past few years. We are very pleased to announce that the first 30 local business owners have now joined together to form the FFN Location Initiative."

2015, the city council had decided to implement the Sustainable Business Park pilot project in the Fechenheim-Nord/Seckbach industrial and commercial area on a total area of 185 hectares. The area stretches north of Hanauer Landstrasse to Seckbacher Ried and is characterised both by industrial use still, but also by retail, state-of-the-art creative industries and cultural facilities such as Klassikstadt, which have emerged from the historic area in recent years. In 2016, the Economic Development Agency installed a site management team for a period of five years to coordinate, moderate and organise site development on site. The ecological aspect is a particularly important part of this. Head of the Environmental Department Rosemarie Heilig, who also took part in the press conference: "With the Sustainable Business Park, we want to create a model example of how existing districts can also be transformed in an innovative way according to ecological criteria - always with the aim of drastically reducing CO2 emissions and using future technologies, for example in energy generation."

Planning Director Mike Josef emphasized in his remarks that the experience gained from the Sustainable Business Park will be incorporated into the commercial land development program. "Active communication between local companies and the administration is an elementary building block for successful municipal commercial land development. In the fast-growing city of Frankfurt am Main, scarce commercial space must be used as efficiently as possible. With the location management in the sustainable commercial area, we are developing the areas in a future-proof way and in line with demand," said Mike Josef.

Another important point is also the stimulation of an active local business community. Oliver Schwebel, Managing Director of Wirtschaftsförderung Frankfurt: "Since the start in 2016, we have succeeded not only in getting the various companies on site to know each other within the framework of entrepreneurial workshops and regular events, but also in literally networking them via our location manager Tobias Löser, so that the area will also live on its own in the future. The fact that we have managed to do this in this short period of time gives us great pleasure, but also shows how committed the various local players are."

A total of 34 measures from the areas of ecology, economy and social & networking are to be implemented over the next few years, including, for example, increasing the proportion of green space or attracting new businesses. And a lot has already happened in the past two years. In October 2016, for example, the location office was launched as a central point of contact for local businesses and residents in the historically modern "Cassellapark", which has since held regular project group meetings, invited interested parties to strategy meetings and represented the concerns of the area to the city. With the appointment of a climate protection manager by the energy department, a competent contact person was also brought on board, who is currently developing a climate protection sub-concept in cooperation with Zero Emission GmbH and has already initiated an energy consulting campaign for local companies. One of the main goals is the renovation of the industrial roads on site. For this alone, the city has reserved more than 50 percent of its 75-million-euro pot of the city's industrial roads program. It also aims to complete the rollout of its fibre-optic network for ultra-fast internet by 2019.

Together for the Sustainable Industrial Estate

One of the key tasks of the site management team was also to pave the way for the establishment of a site initiative. In a total of four entrepreneur workshops and countless strategy meetings, a circle of 30 entrepreneurs was formed within just two years, who have now jointly founded the location initiative FFN (FrankFurter Osten Nachhaltig). These include Praunheimer Werkstätten gGmbH, Westfalia Eichmann GmbH, F. Hofmeister Marmor- und Granitwerk GmbH and Helmut HAUG GmbH. Stella Stilgenbauer (Schulz & Souard GmbH), chairwoman of the board of the newly founded association: "A location like the Fechenheim-Nord/Seckbach industrial estate can only develop if everyone pulls together. And the pilot project gives us a unique opportunity to help write the history of the location. That's what got us all excited, and that's why we're all committed to the site." In this way, the community of interest can have a say in the urban development of the area in the future and shape important issues, for example in the area of marketing and communication.

At the press briefing, the new logo of the site initiative and the revised website at <link http: www.frankfurter-osten.de _blank>

were also presented. Both reflect the green profile of the site and at the same time symbolise the dynamism and adaptability of one of the few inner-city locations with industrial use. The website offers high information value and is also intended to serve as an important presentation area for local companies via the company directory.

With around 550 companies and over 7,000 employees subject to social insurance contributions, the Sustainable Business Park is one of the largest industrial and commercial areas in the Main metropolis. In addition to good public transport connections with two underground lines (U4, U7) and its own tram line (11), the area also has a fast connection to the A66 and A661 motorways. Shopping facilities, local amenities and also sports and leisure areas as well as the proximity to Frankfurt's green belt round off the profile