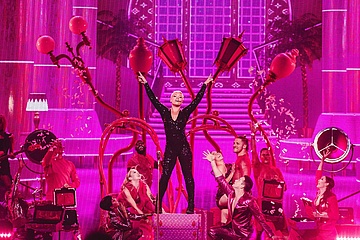 With her 2000 debut album "Can`t take me home", singer Alecia Moore, better known as P!NK, got off to an impressive start in the music business. The album produced three top 10 singles in the US. P!NK's final international breakthrough came with the follow-up album "Missundaztood", which has sold almost 12 million copies worldwide. Hits like "Get the Party started", "Just like a pill", "Don`t let me get me" and "Family Portrait" blocked the upper regions of the singles charts for weeks. If you thought that was the end of the road, you were sorely mistaken: more No. 1 albums, countless music awards and sold-out tours followed, setting the standard in every respect.

There's no question about it, in 2018 P!NK is a bona fide pop icon who has once again topped charts worldwide with her album "Beautiful Traume". For the first time in five years, the singer is also coming back to Germany on tour with her latest album, which will also take her to Frankfurt in the summer of 2019. Famous for her immensely powerful and unique voice and her highly explosive live shows, fans can already look forward to sensational experiences here in Germany. The Germany dates start on July 05 in Cologne (RheinEnergie Stadion) and will take P!NK to the Commerzbank Arena in Frankfurt on July 22, 2019, in addition to Hamburg (July 08, Volksparkstadion), Stuttgart (July 10, Mercedes-Benz Arena), Hanover (July 12, HDI Arena), Berlin (July 14, Olympiastadion) and Munich (July 26, Olympiastadion).

P!NK has already wowed fans in North America, Australia and New Zealand on her Beautiful Trauma World Tour, which kicked off in Phoenix, USA in March 2018. A Variety Magazine reporter summarized, "I can say without any hyperbole that in all the decades I've been going to and covering concerts, P!NK is physically the most 'holy f---ing s---' artist I have ever seen as a pop act'. Aside from her short visit with a double show at Berlin's Waldbühne in 2017, the upcoming shows will be P!NK's first German concerts since 2013 and many of the stadiums will even be her first time performing.

Since her debut in 2000, P!NK has released seven studio albums and one greatest hits album, as well as sold over 57 million album equivalents, over 75 million singles and over 2.4 million DVDs worldwide, and placed 15 singles in the Top 10 on the Billboard Hot 100 chart (four of them at #1). She is also the proud owner of three Grammy Awards (19 nominations), one Daytime Emmy Award, three Billboard Music Awards, seven MTV Video Music Awards (including the 2017 Michael Jackson Vanguard Award), two MTV Europe Awards and two People's Choice Awards. She was named Billboard's Woman of the Year in 2013 and has sold out stadiums and arenas worldwide.

P!NK will be joined on this tour by special guests Vance Joy, KidCutUp and Bang Bang Romeo (the latter not in Frankfurt and Munich). Australian singersongwriter Vance Joy rose to fame with his megahit Riptide and already boasts a total of over one billion streams on Spotify. International DJ Kid Cut Up has opened all of P!NK's concerts so far as part of their Beautiful Trauma World Tour. His unique remixes and edits have already earned him airplay in the U.S., and he's also wowing artists like The Chainsmokers, Diplo and DJ Khaled.

P!NK is an enthusiastic supporter of various charitable organizations, these include: Make a Wish Foundation, Autism Speaks, Human Rights Campaign as well as No Kid Hungry. She also serves as an ambassador on the UNICEF team. Just recently, she was also the cover woman of People Magazine's The Beautiful Issue.