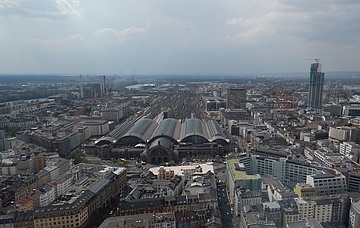 It has been discussed for a long time, now an implementation is becoming more and more likely: Frankfurt's main station, the second busiest long-distance station in Germany, is to become even more attractive for travellers and commuters: The above-ground rail network is to be relieved by a long-distance tunnel, which would allow significantly more trains to serve the Main metropolis. In the future, most long-distance trains are to approach the main station 35 meters below ground and stop at the planned station Hauptbahnhof tief. Passengers in Frankfurt's transport hub will thus be able to travel more reliably and more quickly - that is the plan. Local transport in the Rhine-Main region will also benefit from the increased service. After a study confirmed the feasibility of the tunnel, Deutsche Bahn (DB) is now starting the concrete planning. And when construction work then begins, the billion-dollar project should be completed ten years later.

DB Board Member for Infrastructure Ronald Pofalla stresses the importance of a long-distance rail tunnel not only for Frankfurt as a location: "The long-distance rail tunnel is another important element for the Deutschlandtakt, which will connect our country's metropolises in a 30-minute rhythm. Thanks to the new tunnel with two underground tracks and four platforms, we are increasing capacity at the Frankfurt hub from 1,250 to 1,500 trains per day - that is an increase of 20 percent. In this way, we are strengthening rail for the urgently needed mobility and climate change in the trade fair city of Frankfurt and our state."

Peter Feldmann, Lord Mayor of the City of Frankfurt am Main, was also pleased that the feasibility study had produced a positive result: "Frankfurt and the entire region are today setting the course for the future. We Frankfurt residents are proud of our long tradition as an international trade fair and commercial centre. Its central location and easy accessibility have always been key success factors for us. With the decision in favor of the long-distance rail tunnel, we are further expanding our transportation hub - through more trains, fewer delays, fewer cars, less congestion, better air. I am delighted with the outcome of the feasibility study!"

Corners of the Feasibility Study

The feasibility study, commissioned by the federal government in 2019, assumes a double-track tunnel construction running from the east as well as west towards Frankfurt's main station, where it connects to a new underground station with four underground tracks.

The results of the study show that the Frankfurt long-distance rail tunnel and the underground through station are technically feasible. The specified cost framework of around 3.6 billion euros is feasible as of today.

For the possible route of the long-distance rail tunnel, DB examined a northern, central and southern corridor between the main station and Frankfurt East in the study. The middle corridor runs under the high-rise buildings. Their foundations, which are up to 50 meters deep, make it technically difficult to build a tunnel. The northern corridor also encounters numerous structural obstacles.

The southern corridor emerged from the study as the best variant. It runs underground past the Frankfurt skyscrapers to the main station. Another advantage of this variant: the future tunnel can be connected to existing railway lines twice. Trains can then use the North and South Main lines. This connection creates optimum capacity for all trains in the direction of Hanau. In the westbound direction, the tunnel will be connected to the new, third Niederräder Bridge.

In the feasibility study, DB also examined various options for the construction and design of the new underground station. This will be built under the southern part of the main station.

Next steps and public participation

Deutsche Bahn is now in the planning process to determine where exactly the new long-distance rail tunnel will best run, how and where it will specifically connect with existing rail lines, and where the future underground station will be best located. DB is taking a transparent approach and involving all interested parties in the planning process. The first information event will already take place on Monday, June 28, at 5 p.m.

Further information is available at http://www.fernbahntunnel-frankfurt.de