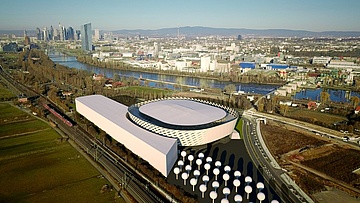 There are still many unanswered questions and many a hurdle still to be cleared, but nevertheless the plans for the multifunctional arena Frankfurt am Kaiserlei have now taken a decisive step forward: A few days ago, the bidding consortium Langano informed the City of Frankfurt am Main that it can present an alternative financing concept. The two city councillors Jan Schneider and Markus Frank were pleased that the issue of the state guarantee is now off the table and the further preparations for the award of a heritable building right to Langano can be continued.

This means that the construction of the multifunctional arena is not yet in the bag, but the likelihood that the arena will come is now much greater than a few days ago. At that time, things were not looking good at all for Langano: the bidding consortium had applied for the construction, financing and operation of a multifunctional arena at the Kaiserlei as part of a tendering process and had been given the status of "first interlocutor". Plus points in the application were the club-friendly conditions for the two Frankfurt teams that are to play ice hockey and basketball in the hall, the urban compact approach and the regional orientation in the operation.

In itself, everything sounded very positive. The sticking point, however, was the investor's desire for a state guarantee, which would have to be backed by a proportionate municipal counter-guarantee to the state. In the discussions of the past weeks it became apparent that there was no majority in the city council for the state guarantee. That would have effectively taken the bid off the table. But Langano reacted to it and informed the city of Frankfurt that one would secure the project with a further capital share and present a financing without guarantee in the short term.

Bau- und Immobiliendezernent Jan Schneider regrets that the negotiations were suspended in recent months by the question of the acceptance of a guarantee. With the clear message "multifunctional arena without guarantee" he can now initiate the next steps to realize the ambitious project of the coalition agreement together with the sports department. The bidder consortium is to receive a heritable building right for a total area of around 25,000 square metres, which is owned by the City of Frankfurt and the city-affiliated Allgemeiner Almosenkasten Foundation. Schneider considers the procedure so far to be extremely demanding: "Such complex land transactions require a particularly long breath. In the case of the intermunicipal project with the city of Offenbach, the clarification of the available plots due to the reallocation procedure on the Offenbach side as well as the reconstruction of the Kaiserlei roundabout were already special challenges."

Markus Frank is relieved that the hurdle of financing has been cleared and that everyone involved can once again devote themselves to the project with pleasure. He hopes that the uncertainty that has arisen among the sports clubs in recent weeks due to the extensive negotiations can now be eliminated and that they can look forward to their further sporting development. He does not want to participate in speculations about the chances of realization of the mega multi-functional arena at the airport, which has been brought up for discussion outside of the tendering process. But of course he will have the plans of the Katz Group, which they presented last Friday at a press conference, presented to him. "Maybe Frankfurt am Main can handle two multifunctional arenas," says the head of the sports department with a smile. "As you can see, the international interest in the project has, after all, had an invigorating effect."