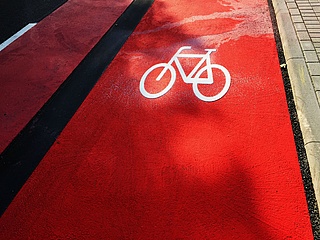 Frankfurt should become more bicycle-friendly! Especially for frequently used streets this is really necessary. Grüneburgweg and Kettenhofweg are two of a total of eleven such frequently used side streets in Frankfurt, which are to be redesigned to be bicycle-friendly in the coming years. The Magistrate had already presented the concept for this to a delegation of Local Advisory Council 2 in December last year. Since a public presentation at a local council meeting is not possible under the pandemic restrictions currently in force, the transport department has decided to publish the information in advance on the city's cycling portal. In addition, it is planned to offer an exhibition in the spring - analogous to the Oeder Weg.

The basis for the redesign plans is the city council resolution on Frankfurt as a cycling city: after the Oeder Weg, the two streets mentioned are now high on the city council's list of priorities. In coordination with the transport department, the lead office for road construction and development (ASE) and the road traffic office have developed a plan for how Kettenhofweg and Grüneburgweg can become a bicycle-friendly traffic area and at the same time gain quality of stay.

In the coming months, the intention is to involve business people and residents as well as citizens and encourage them to participate in the redesign process. In the dialogue, concrete impulses for the detailed planning can be taken up. This will be followed in parallel by close coordination with Local Advisory Council 2.

Once a consensus has been reached with Local Advisory Council 2, provisional measures are initially planned. If these prove successful and are well received by the population, a structural redesign will follow.

In autumn last year, the transport department had presented the plans for the redesign of the Oeder Weg into a bicycle-friendly side street to both the local advisory council and the interested public. Residents and tradespeople have since participated with numerous suggestions, which have been incorporated into the city's plans.