Plans for more quality of stay at Wiesenhüttenplatz
from FFM Aktuell 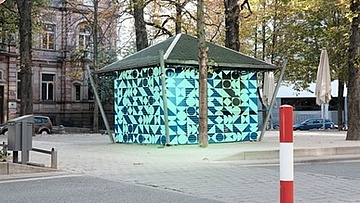 For several years now, the Wiesenhüttenplatz (WHP) association has been trying to turn the Wiesenhüttenplatz near Frankfurt's main train station into a local recreation area, and not just for residents. No easy undertaking, because the square in the station district, which was redesigned as a "secluded green space" for the 2006 World Cup, had a rather shadowy existence for a long time and caused great problems for the tradespeople and residents with an extremely difficult clientele for a long time. A scene kiosk with hand-picked delicacies, open air cinema, public viewing, markets and other offers were supposed to change this. However, the big breakthrough has so far failed to materialize despite many great ideas and a lot of positive feedback.

Markus Frank gave the impetus for the founding of the location initiative at the time: "We sat down with the hoteliers located on the square and the regulatory authorities, because it takes committed people who organize themselves to bring their location forward. Over numerous rounds of talks, the plan matured to reclaim this beautiful place in the heart of the city and design it to be accessible to as many people as possible."

The Wiesenhüttenplatz Association was formed and it was clear to all involved, this was not going to be an easy road. The members of the association - a community of hoteliers, restaurateurs and tradesmen located on the square and in the immediate vicinity - have developed a far-reaching concept with great commitment for more cleanliness, safety and for the repositioning of Wiesenhüttenplatz as a charming gem in the Bahnhofsviertel.

To continue on the difficult path is a matter of course for those involved, because finally the first successes can be seen. That is why it is now to continue in any case: "The plans regarding a possible redesign of the square were often discussed on site, but also in the offices with the responsible municipal departments, various expert opinions were commissioned and finally we were able to win the tourism advisory board for the financing of two lighthouse projects for this square. I commend everyone who has been involved in this effort: The learning curve has been steep and everyone has shown extreme staying power."

Even with the pandemic now more than a year old, the site initiative wants to make a statement together with the city. Two highlights are lined up for the first half of 2021, both of which will be funded primarily by the Toruism Advisory Board.

After years of intensive planning, construction of the light art piece on the south side of the square will begin. The light artwork is being designed and built by "Tatcraft", the platform for transformative ideas at "Tatcraft New Hardware Studios".

The installation boasts impressive figures: 6 meters long, rising 2.5 meters from the ground, 50 centimeters deep, consisting of approximately 150 aluminum panels, it has a total weight of about 7.5 tons. The Frankfurt lettering, penned by the Frankfurt agency Nordisk Büro, originates from a competition once called by Journal Frankfurt, Atelier Markgraph and the Bauhaus University in Weimar, in which the aim was to design an image-boosting logo for the city of Frankfurt am Main.

Also a project funded by the tourism levy is the OpenAirMuseum (OAM) of the TAB association, which is starting with the artistic design of the kiosk façade Wiesenhüttenplatz. Designed and implemented by TAB creative director Michael Hazkiahu aka Hazki, there were also many hurdles to overcome, coordination meetings and approval procedures to go through. The blue façade of the kiosk is to be enhanced with a geometric pattern. The kiosk's new color scheme references the plaza's surroundings, citing the trees and the view of blue sky through the canopy. None of the patterns on the four sides are repeated; the intuitive arrangement of the geometric shapes "dilutes" the basic structure of the water shed. Again, there were many coordination meetings and approval processes to go through, patience and attention to detail required.

There is much excitement about the new attractions. But until then, there's also plenty of work to be done. After hotel director Wolfgang Selinger resigned as the previous first chairman due to his job-related change of location, the general meeting of the Wiesenhüttenplatz association unanimously elected a new board of directors on February 1. The first chairman is Babak Farahani, who will run the kiosk Yok Yok Eden on Wiesenhüttenplatz together with his partners in the future. Second chairman is Kevin Nattermann, new director of Le Méridien Frankfurt, and thus successor to Wolfgang Selinger.

The new chairman and his team have established a very intensive connection to Wiesenhüttenplatz with the pop-up operation of Yok Yok Eden in the summer of 2020 and would like to continue this with and for the association. The square stands and falls with the people - that is one of the positive experiences from the activities since the founding of the association. All those who are involved here know this. "It is not a matter of course to take joint responsibility for one's location," emphasizes the city councilman, who is visibly pleased with the initiative's commitment. "Especially not in times when most hoteliers and restaurateurs have to put all their resources into maintaining their own existence. Therefore, respect and high praise: with this thoughtful concept, Wiesenhüttenplatz does justice to all its facets."

At Wiesenhüttenplatz, upscale hotel business, urban workspace as well as casual kiosk gastronomy come together against the backdrop of Villa Kleyer. Embedded in the garden-like grounds, which form a surprising contrast to the urban railway station district, the square is far too good not to be included in the city life, think the patient residents. In this sense, the new board would like to continue the successful work of the association.

Together with the city of Frankfurt, further possibilities for the design of the square with, for example, a better illumination of dark corners or the installation of more bicycle racks are discussed and advanced. Cooperation with cultural institutions, including open-air cinema or individual sporting events, are also on the wish list of the new board.