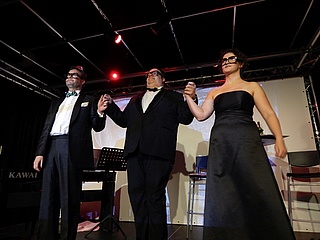 On Friday, Theater Alte Brücke hosted a very special program: With "Always Poisoning Pigeons", Alexander J. Beck, Sabrina Faber and Franz Fischer paid an absolutely worthy tribute to the Vienna-born composer, singer and poet Georg Kreisler. The artist, who died in 2011, was known for his deep black humour, his cryptic lyrics and his non-conformist performances. The trio on stage has now compiled the most biting songs and lyrics into a Kreisler evening that fits perfectly into the Theater Alte Brücke. Versatile, humorous, biting, melancholic and always surprising - this applies to the program of the small theater, as well as to the songs of Kreisler.

Heartfelt laughter is replaced by depressing melancholy, which is then again dispelled by cheerful cynicism. All the while, the songs have rarely been modernized a smidge. This makes it clear how timelessly good Kreisler's lyrics are and how apt his social criticism still is today. At the same time, however, one also becomes aware of how much political correctness has taken hold of us in the meantime. Because some of the lyrics, which might have been nasty even a few decades ago, really make you stop laughing today and make you wonder whether it's still allowed to say such things at all - even in an obviously cabaret setting. But it is precisely this that makes clear the topicality of Kreisler's texts, whether they are about xenophobia, censorship or the suppression of the atrocities of the Nazi regime.

Now that doesn't really sound like an entertaining evening. But even though there are some really depressing moments, it's always then, just before the mood is dragged all the way down, that things really turn up. For example, when Sabrina Faber has given a really great solo performance with the sad "Das Wort 'Verlassen'", Alexander J. Beck storms onto the stage immediately afterwards to provide a wonderfully comic contrast with "Mein Weib will mich verlassen". In any case, the three people involved on stage deserve very high praise. After all, Kreisler's texts are sometimes very difficult - for example in the tongue-twisting "Telephone Book Polka", in which names such as Vorrak, Vorlicek, Vosmik, Vorlik, Vrba, Vrtl or Vozenilek have to be recited at high speed. Beck, Faber and Fischer mastered this with bravura. They skilfully passed the verbal balls to each other, making perfect use of their respective strengths.

How well this worked becomes clear, for example, in the song "Der Witz" (The Joke), in which it is not only Beck's marvellous attempts to retell the joke his friend Fritz told him to the audience that cause laughter. What Franz Fischer and Sabrina Faber do in the face of their colleague's inability to tell a simple joke makes the number all the more amusing.

A perfectly coordinated selection of songs, three great artists, very good arrangements and cryptic humour make "Immer wieder Tauben vergiften" a thoroughly recommendable evening at the theatre. Alone when Alexander J. Beck shows at the end how unbelievably funny the suffering of a man "On his deathbed" can be, makes the visit to the Theater Alte Brücke once again worthwhile! This season, Kreisler Evening will be performed three more times, twice in February 2017 and once in April! This is actually the perfect Christmas present for all friends of cultivated gallows humor. You can get tickets at: <link http: theater-alte-bruecke.de _blank>Http://theater-alte-bruecke.de/