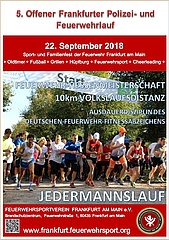 It's time to run again: On Saturday, 22 September, the annual police and fire brigade run over the ten-kilometre popular running distance will once again take place at the Frankfurt Fire and Disaster Control Centre. Anyone with a desire to run may take part, as well as all members of the police and judicial authorities, fire brigade, rescue services and employees of the municipal administration of the City of Frankfurt am Main.

The event is organised by the Frankfurt Fire Brigade Sports Club. It is integrated into the sports and family festival of the Frankfurt Fire Brigade. In addition to bouncy castles and the like, the supporting programme will once again include a classic car meeting, a modern vehicle show, tours of the fire brigade training centre, demonstration exercises by the fire brigade and rescue dog squad and also other sporting activities such as the Southwest Cup tournament for professional fire brigades and also, for the first time, a supra-regional comparison competition in the disciplines of the German fire brigade fitness badge.

Particularly hard-boiled task forces can still compete in the disciplines of strength and coordination in a two-person team after the fun run as an endurance discipline.

In addition to the blue light classification open to everyone, the working group for sports and health management of the AGBF Hessen will be awarding the Hesse championship in the people's run. In addition, the fastest employee of the Frankfurt city administration will also be honored.

The start will be at 10.30 a.m. in the upper area of Marbachweg not far from the Fire Protection Centre at Feuerwehrstraße 1.

Here it goes directly to the Anmeldug