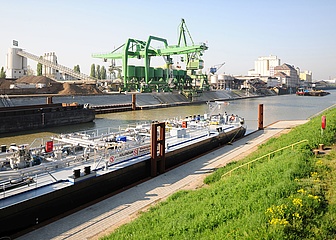 (ffm) "HFM Managementgesellschaft für Hafen und Markt was able to record a slight increase in traffic last year despite low water. This shows that one of the strengths of the Port of Frankfurt is its flexibility," expressed the Chairman of the Supervisory Board of HFM, City Councillor Markus Frank.

Thanks to trimodal logistics services, the severe low water last year had only a limited impact on the overall result. The Port of Frankfurt handled a total of 3.77 million tonnes of goods by ship and rail in 2018, an increase of 1.6 percent on the previous year. Due to the severe low water on the Rhine and its tributaries, handling by barge decreased by 6.5 percent compared to 2017. The low water meant that the ships could not be loaded nearly to capacity for several months. This circumstance made ship transports more expensive and led to an overall decline in transshipments due to the limited availability of additional ships. Nationwide, the transport of goods by inland waterway vessel decreased by 11.1 percent, which was even more significant. In Frankfurt, the difficult conditions in waterborne freight traffic were offset to a large extent by shifts to rail. Freight traffic on HFM's port railway increased by 34.7 per cent compared to 2017. A total of 981,514 tons were handled by rail and 2,787,676 tons by barge.

The largest transport volumes in the barge segment

The largest transport volumes in the port railway segment