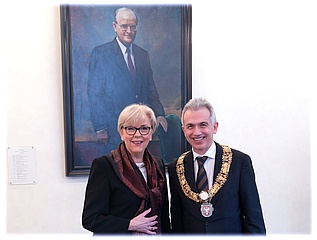 (kus) The gallery of Frankfurt's city leaders in the Römer town hall has grown: On Monday, February 27, the portrait of former Lord Mayor Wolfram Brück, who died last year, was unveiled in the Wandelhalle in front of the magistrate's meeting room. Brück had led the city's fortunes from 1986 to 1989, having previously served on the Magistrate's Council as a departmental head for almost a decade.

In the presence of the deceased's wife and other family members, Lord Mayor Peter Feldmann presented the portrait, which was designed by Cologne painter Toni May (1914 - 2004). Usually, the paintings for this gallery are made during the lifetime of the city leaders, but only placed there after their passing.

The picture accurately reflects the personality of Brück, Lord Mayor Feldmann is sure. "Sober, clear lines, friendly but determined and self-confident, he looks at us in this painting, the posture like a brief pause, a sideways glance towards the viewer, but actually already on his way to the next task, as if he wanted to say something briefly before moving on," the Lord Mayor described his impression when looking at the painting.

On behalf of the family of the former city leader, his brother, Prof. Dr. Gernot Brück thanked him for the ceremony. He said they were particularly pleased with the very meaningful choice of date, as February 27 was not only Wolfram Brück's date of birth, the former mayor would also have turned eighty this year.