Positive meeting and congress statistics 2018 for Frankfurt
from FFM Aktuell 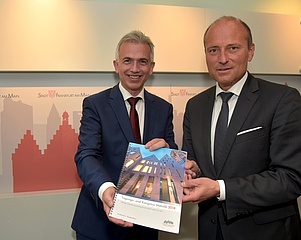 Lord Mayor Peter Feldmann was pleased to announce positive news in the field of meetings and congresses in Frankfurt: "The positive development of Frankfurt am Main as a meeting and congress location continues to gain momentum," said the Lord Mayor. With an increase of 5.7 percent at almost 80,000 events, Frankfurt has once again significantly exceeded the record result of the previous year.

The figures sound very good indeed: according to the latest Frankfurt meeting and congress statistics, more than five million participants came to the city in 2018. This represents a more than respectable increase of 10.6 percent compared to 2017, meaning that meetings and congresses are playing an increasingly important role in the overall tourism of the city of Frankfurt. Meanwhile, 20 percent of all overnight stays come from the conference business.

For Frankfurt, the volume of events means an average daily visitor flow of around 13,940 people. Total revenue from these events rose 13.5 percent in 2018 to €987.3 million, also marking a new record. "The congress business is a significant economic and image factor for our Main metropolis, the number of participants is increasing and there have never been so many event venues," summed up the Lord Mayor. Thomas Feda, Managing Director of Tourismus+Congress GmbH Frankfurt (TCF) added: "Our national and international commitment to raising Frankfurt's status as a congress city has been successful. The cooperation with Messe Frankfurt in the acquisition process is particularly noteworthy."

As in the past, mainly smaller conferences with up to 50 participants (number: 60,926) were hosted in the city. They increased by 2.5 percent and accounted for 76.3 percent of the events recorded. On the other hand, large events with more than 1000 participants (number: 318) recorded the biggest increase in five years.

The top industries holding their events in Frankfurt are financial services, consulting services, chemicals and pharmaceuticals. The majority of organisers continued to come from Germany. In terms of international source markets, the UK was unchanged in first place. The USA gained ground and came in second place, followed by Switzerland. China stabilized as the most important source market for business travel from Asia and was among the top five source nations for the first time. "Frankfurt is more attuned to Chinese guests and their needs than any other German city," Feda explained.

Meanwhile, there is no end in sight to this positive development for Frankfurt as a business location: "The forecast says that event and participant numbers will continue to rise," said Lord Mayor Feldmann. The EBTM (European Society of Blood and Marrow Transplantation) congress in March and the ap&m (airline purchasing & maintenance) conference in June are just two examples of particularly high-profile events this year.

The new Old Town, with attractive conference facilities around the Quarter, is increasingly proving to be a magnet for even more conference guests.

Also the laying of the foundation stone for the construction of the new Terminal 3 at Frankfurt Airport and the planned expansion of the S-Bahn with a new stop at Gateway Gardens and better connections to the hotels there, are trend-setting events on the way to even stronger demand in the meeting and congress segment.