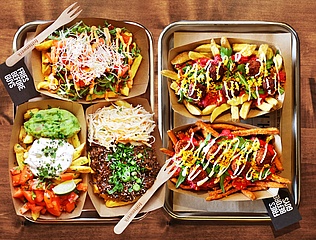 O Canada! Our home and native land! Don't be surprised if we're singing the Canadian national anthem here with fervor. But there is a good reason for it: On 01 July Canada celebrates its 151st birthday. And Frankfurt is also celebrating Canada Day. In the <link https: www.frankfurt-tipp.de geniesser-tipp s geniessertipp das-frittenwerk-bringt-kanadische-spezialitaeten-nach-frankfurt.html _blank>Frittenwerk at the main station steigt the party of the year - after all, the Canadian national dish Poutine is served here. For this reason, the red and white flag will be hoisted on 01 July and the party will start at 11:30 am. The team of the Frittenwerk will serve you every poutine including a cool drink for only 5 &euro;. And DJ Mericson will provide summery beats.

guests can look forward to an exciting new creation. The Frittenwerk team has been working extensively on new recipes over the past weeks and months, and will be presenting an exciting new poutine creation just in time for Canada Day. You can be curious - it will definitely be delicious! The fries themselves have also recently undergone a real update: Regionally grown on the pristine soils of Bavaria, the new Frittenwerk potato is thriving exclusively for Pommesmanufaktur. The tubers are refined according to a unique recipe, freshly cut in the "Housecut" and land with 100% frites love directly in the frites bowl - the principle "Farm to Table" can hardly be lived more honestly.

The Frittenwerk in Frankfurt is the fourth of now six branches. With its special charm, the frites factory has taken the hearts of frites fans by storm since it opened almost a year ago and has won them over to the Canadian snack classic poutine. If you're not yet familiar with the fry plant, or even if you're already addicted to poutines, be sure to stop by on Canada Day!