Preview of 'A Case for Two'
from FFM Aktuell 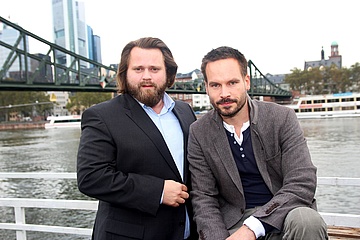 (kus) For the preview of the episode "Powerless" from the third season of "A Case for Two" on Wednesday, October 19, at 4:30 p.m., Lord Mayor Peter Feldmann and City Council Chairman Stephan Siegler invite Frankfurt citizens to the plenary hall in the Römer City Hall. During a visit to the set, the Lord Mayor had arranged a preview in the Römer. "For the first time in 35 years, the people of Frankfurt will now be able to see an episode of the well-known series before it is broadcast on television," said Peter Feldmann.

In the new season of the unconventional Frankfurt lawyer-detective duo, it is not only exciting in the criminal cases, but also in the private lives of Benni Hornberg (Antoine Monot Jr.) and Leo Oswald (Wanja Mues) there is a lot to sort out.

The number of seats is limited. Free tickets can be picked up at Bürgerberatung, Zeil 3, during opening hours starting October 10. Info at <link http: www.frankfurt.de buergerberatung _blank>

Due to security requirements at the Römer, only visitors with tickets and valid ID will be admitted to the preview
Share: