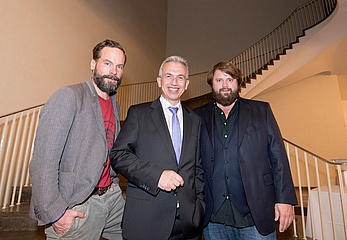 On Tuesday, October 9, interested Frankfurt residents had the opportunity to watch the new episode "The Divided Apple" of the cult series EIN FALL FÜR ZWEI even before it was broadcast on TV. That in itself is something special. But as the icing on the cake, the whole thing could also be seen in a very unusual location: In the Kaisersaal of Frankfurt's Römer, where usually honors take place and heads of state are received.

The screening took place as part of the new "Frankfurt Previews" series. "With this series, the city of Frankfurt wants to create a forum for films about and from Frankfurt - no matter what category it is, short or feature-length film, we want to give space to different narrative structures. Since the first broadcast of 'A Case for Two' almost four decades ago, the image of the city has changed considerably; some corners the viewer of yesteryear would hardly recognize," said Lord Mayor Peter Feldmann.

200 Frankfurt citizens came to the preview of the latest Frankfurt crime thriller in the Kaisersaal. Lord Mayor Feldmann struck up a conversation with some of them. After a lively conversation with the main actors Antoine Monot (Benni Hornberg) and Wanja Mues (Leo Oswald) and the producer Marcus Mende, the head of the city was delighted that so many Frankfurt residents had accepted the invitation to watch the film in the Kaisersaal before it was broadcast on television.

The episode "The Divided Apple" will be broadcast on Friday, October 26, at 8:15 p.m. on ZDF. The plot takes place in a cider tavern run by two owners. After an argument, one of the operators is found dead in the cellar