Preview of the Bahnhofsviertel Night 2017
from FFM Aktuell 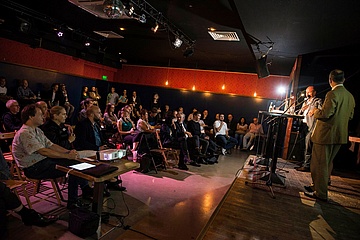 (kus) The Bahnhofsviertelacht 2017 is casting its shadow ahead: on Wednesday, 9. August, Lord Mayor Peter Feldmann, Tarkan Akman, Head of the Office for Communication and City Marketing (KUS), and Thomas Feda, Managing Director of Tourismus+Congress GmbH, presented the programme for the tenth Bahnhofsviertel Night at the Orange Peel.

"On Thursday, 17 August, the quarter between the main railway station and the bank towers will now become a unique meeting place for one night for the tenth time," said Lord Mayor Peter Feldmann, explaining the anniversary. "What began in 2008 as a one-off event to mark the 120th anniversary of Frankfurt Central Station has long since become a permanent fixture in the city's events calendar."

The artist Anne Imhof also took part in the press conference. The artist, who won the Golden Lion at the Venice Art Biennale in May, spontaneously came to the Bahnhofsviertel preview at the Orange Peel at the invitation of the Lord Mayor, having signed the city's Golden Book in the Kaisersaal a few hours earlier. "I live and work in the Bahnhofsviertel, many of my friends live here too. You can find good neighbourhoods everywhere in the city, but for me the Bahnhofsviertel is the first choice - and the reason why I live in Frankfurt," said Imhof.

At a total of 50 programme stations, visitors to this year's Bahnhofsviertel Night can see for themselves how international, creative and urban the district in the heart of Frankfurt is. New this year are the trendy club Oye in Taunusstraße 19, the counselling centre "Hiwa!", where older migrants in Gutleutstraße 17a receive help in all life situations, and the addiction self-help facility Fegerflotte in Karlsruher Straße 9. In the same building is the competence centre of the Verein für Arbeits- und Erziehungshilfe (vae), which is also taking part for the first time this year. Meanwhile, multimedia guided tours of the city, literary concerts and acrobatics to amaze will be offered by the "Five Gentlemen" during their performance at Orange Peel in Kaiserstraße 39.

"The newly added stations are an example of how diverse the cultural offerings of the Bahnhofsviertel are," Tarkan Akman emphasized. Of course, there will again be numerous themed tours through the quarter in 2017. Live concerts, lectures and a varied cultural programme round off the offerings of the tenth Bahnhofsviertel night. "This year, we will once again do everything we can to support the staging of a peaceful and varied Bahnhofsviertelacht," Thomas Feda emphasised in conclusion.

Further information on the programme is available at