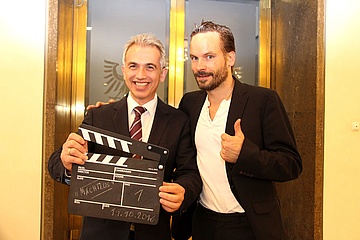 (kus) For the preview of the episode "Powerless" from the third season of "A Fall für zwei", Frankfurt citizens were invited to the Plenarsaal in the Römer City Hall on Wednesday, October 19.

In the new season of the unconventional Frankfurt lawyer-detective duo, things are not only exciting in the criminal cases, but also in the private lives of Benni Hornberg (Antoine Monot Jr.) and Leo Oswald (Wanja Mues).

"A Case for Two" is the only series that has been set in Frankfurt for 35 years.

"For the first time in 35 years, the people of Frankfurt have now been able to see an episode of the well-known series even before it is broadcast on television," says Peter Feldmann. "During a visit to the set in 2014, the idea arose to perform an episode of the 3rd season in the Römer. I spontaneously invited people to do so. I was impressed even then that Matula's successor, Leo Oswald, no longer resides in a high-rise building but lives on a houseboat," adds the Lord Mayor.

In the episode, viewers will recognize many locations. The locations of the action are the Eiserne Steg, the Mainzer Landstraße, the Bahnhofsviertel, the Silberturm and the Skyper. "The episode 'Powerless' revolves around the topic of housing, which is very close to my heart," adds the Lord Mayor. However, the film looks at this issue from a different angle. The episode talks about dispossession and gentrification and asks: how does a city evolve?

"ZDF chose our city as the location for the story because Frankfurt has everything that life has to offer. Internationality and regionality characterize our city. Stories dealing with wealth and poverty, banks and prostitution can be set here. And in view of the rapid pace of change, authors are unlikely to run out of themes, directors of sets, actors of atmosphere for new films and series in, about and from Frankfurt any time soon. Because Frankfurt may be many things - but it is never boring and monotonous here," Peter Feldmann is convinced.