Prince meeting at Bäppi's in the Theatrallalla
from FFM Aktuell 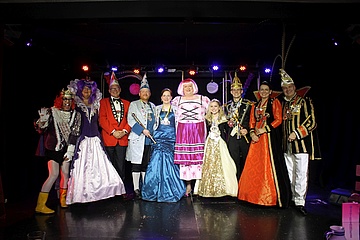 Crowning finale for Bäppis Fassenachtsshow 2017: at the last performance last Sunday, three prince couples from Nidda, Gedern and Wetzlar did the honors. In tow, of course, the royalities also had their court, which has provided for exuberant mood during the colorful show.

Bäppi has mutated into the star of the Hessian Fassenacht in recent years. Last season he released his own carnival CD "Ich stemm die Fleischworscht mit aner Hand", on which some classics ("Gell Du hast mich gelle gern", "Wini Wini Wana Wana"), as well as two original compositions can be heard. And in 2017 Bäppi is going to start with the cult-suspicious "Burka-Song". And so his Fassenacht show this year was once again a complete success - not only, but especially on this evening, which the princes and princesses will not soon forget. Fassenacht as it must be. And next year Bäppi wants to have 10 pairs of princes there. That will be nevertheless to be created!