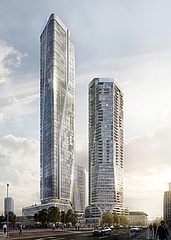 A lot has been happening for months on the former Deutsche Bank site in Frankfurt city centre. But it's only now that it's possible to get down to business. Last week, planning department head Mike Josef handed over the building permit for the four high-rise towers of the major FOUR project to Groß & Partner managing directors Jürgen Groß and Jens Hausmann. A small act with a big effect: With the granting of the building permit, one of the most complex projects the Frankfurt project developer has ever supervised and the city has ever approved can now actually be implemented.

complex is the project FOUR for the sole reason that a plot of land is being developed on the site, which is completely surrounded by partly high buildings and roadways, so that the buildable space is very limited. This also poses challenges for the construction site logistics, but the effort is worthwhile: "The skyline will be significantly enriched by this ensemble. This not only changes the view of Frankfurt, but also life in the centre of Frankfurt," Jürgen Groß is convinced. It can therefore be assumed that even more camera lenses will be directed towards the skyline after completion of the ensemble.

For the head of the planning department, Josef, the FOUR project means above all a change in the banking district: "FOUR will make the district more mixed. For the first time, a family of high-rise buildings is being built in Frankfurt, consisting of four high-rise buildings around a common, public centre. It will be a quarter for all income levels, with a large mix of uses and more quality of life" - an approach that the city has been pursuing in Frankfurt's banking district for some time.

"The aim of the FOUR project is to reopen the inner-city area that has been closed off for decades and make it accessible to Frankfurt's residents," adds Hausmann. The construction of four towers will enable a diverse mix of uses, combining living, working and living in one place. "Such a project does not emerge in isolation at the drawing tables of the project developers, but as the result of close cooperation with the representatives of the City of Frankfurt," emphasizes Groß.

The head of the planning department agrees: "We work closely together in a spirit of trust and know each other as reliable partners. Ben van Berkel, founder and chief architect of the UNStudio, which designed the four high-rise towers, also praises the cooperation between the city and the developer: "We are delighted with this news. FOUR will first and foremost be built for the people of Frankfurt. With a development concept that is unique in Europe, it will not only enrich the city skyline, but also increase the vibrancy of the entire city".

For Mike Josef, however, FOUR is also a personal project, because: "It was the first planning project for which I sat on the jury - and now I can present the building permit. That is really something special. Even during the Corona period, the building inspector completed the approval procedure without delay."

You can be curious to see whether FOUR will really enrich the inner city and how the promised "mix of uses" will affect life in the city.