Promoting networking: The city of Frankfurt joins the Luminale association
from FFM Aktuell 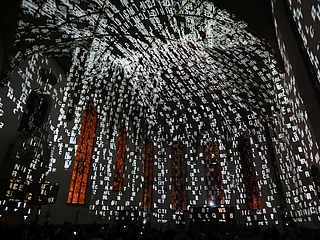 (kus) Boost for the Luminale: The magistrate of the city of Frankfurt has decided to join the Luminale association. This was announced by the association's board after its general meeting at the future festival center at the Instituto Cervantes on October 13.

"The Luminale has become a part of Frankfurt. Joining is a clear commitment to the Luminale, which not only offers spectacular light installations, but is also dedicated to various social issues," says Lord Mayor Peter Feldmann.

"The association was founded in June of this year to promote the Luminale as a 'biennial for light art and urban design' and, in particular, to support artists and creative people in the realization of their works as part of the event," explains the Lord Mayor. The new, non-profit organisation lays an important foundation stone for the future of the popular event. In the long term, the Luminale is to be supported by a broad community of interests and placed on a solid financial foundation.

The Luminale was founded in 2002 by Messe Frankfurt, which has since extensively promoted and supported the festival. Wolfgang Marzin, Chairman of the Board of Management of Messe Frankfurt, emphasises: "I am very pleased that the Luminale is now gaining new strong impetus for the future by opening up thematically and tapping into an even broader community of interest. This will ensure sustainability, international appeal and long-term success."

The Stiftung Polytechnische Gesellschaft Frankfurt am Main has recently agreed to support the Solutions programme area. Here, Luminale invites renowned experts and citizens to engage in interdisciplinary dialogue and discourse on the future and the city. The focus is on the environment, architecture, security, mobility and people. The venue is the Festival Center at Frankfurt's Instituto Cervantes (the former Amerika-Haus). Roland Kaehlbrandt, Chairman of the Board of the Stiftung Polytechnische Gesellschaft, says: "We welcome the Luminale's new direction of opening up to important issues in urban society and involving citizens more, in addition to presenting light art."

In addition, other business enterprises and institutions have pledged their support, including AGB Holding, DomRömer GmbH and the aforementioned Instituto Cervantes.

They have set the stage for the opera in Sydney, the statue of Christ in Rio de Janeiro or the central bank in Weimar with light art. Now they want to "illuminate" Frankfurt with their works: 70 artists and creatives from nine countries have applied to participate in the Luminale as part of the "Call for Art". As a starting point for the submissions, the Luminale office had compiled an overview of currently 28 "Places of Interest" in whose staging the festival is particularly interested.

These include prominent landmarks such as the Römer, the DomRömer quarter, Frankfurt's new center, but also rather unknown, hidden places as well as venues in neighboring Offenbach. As many of these places as possible are then to be connected with each other on an attention-grabbing "Light Walk".

Until November 30, projects can still be submitted for the Community and Study categories. The Open Call in the Better City as well as Solutions categories ended on September 30.

All information is available on the festival website <link http: www.luminale-frankfurt.de _blank>

With around 200,000 visitors, the Luminale is one of the largest events in Frankfurt and the Rhine-Main region. The light festival takes place every two years at the same time as the international Light + Building trade fair. Luminale was founded in 2002 by Messe Frankfurt, which has since extensively promoted and supported the festival.

<link https: www.frankfurt-tipp.de ffm-aktuell s ugc neues-konzept-fuer-die-luminale.html _blank>From 18 to 23 March 2018, Luminale will be launching with a new concept. Frankfurt and Offenbach will not only be the stage for the art of light, but also the subject of the festival itself. The Luminale positions itself as a biennial for light art and urban design with the aim of providing an impulse for the positioning of the city as an attractive future location and "creative hub" at the interface of art, technology and urbanity.