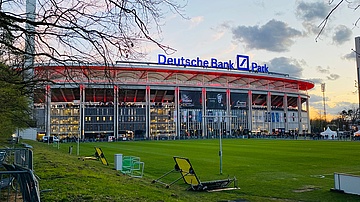 There is reason to cheer: after the victorious semi-final match against France, the DFB women will stand on Sunday, 31. After the semi-final match against France, the DFB women will be playing in the final of the European soccer championship at Wembley on Sunday, July 22 - and the city of Frankfurt is inviting everyone to a free public viewing event in the stadium. The match for the classic England versus Germany kicks off at 6 p.m., with admission starting at 4 p.m. A ticket booking is necessary at universe.com.

The game will be broadcast on an approximately 100 square meter LED wall. In addition, it runs on the video cube. Up to 4500 seats are available on the counter stand

The entrance to the stadium is free, also the parking lots Waldparkplatz and Gleisdreieck are available free of charge. The stadium underground car park, however, will remain closed. The stadium catering will be provided by the kiosks on the opposing stand.

No matter whether the European Championship final is won or whether the DFB women only come second - on Monday, the players and their coach will then be welcomed to Frankfurt's Römer from around 4 p.m., where they will be celebrated by their fans on the balcony. We keep our fingers crossed that the team comes to Frankfurt with the European Championship victory in the bag!