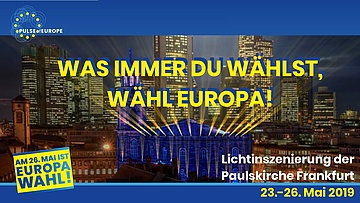 (ffm) On Thursday, May 23, also the first day of the European elections and the 70th anniversary of the Basic Law, an elaborate light show will take place in the evening at Frankfurt's Paulskirche. At the cradle of democracy in Germany, the citizens' movement Pulse of Europe wants to send a strong signal for peace, freedom and cohesion in Europe and call on citizens with this event once again to go to the polls on Sunday, 26 May and help democratic, pro-European parties to win the elections.

First of all, starting at 7 p.m., a stage programme is planned on Paulsplatz with live music by the band Cris Cosmo and TV presenter Carolin Henseler, among others, and with speeches by Lord Mayor Peter Feldmann, former President of the European Parliament Klaus Hänsch and Pulse of Europe founder Daniel Röder. In addition, Prime Minister Volker Bouffier is requested.

The actual light show is scheduled for about 21.45 clock. The Paulskirche, the symbol of the democratic beginnings of a united Germany, is to be used as a spark to promote a united Europe. The twelve stars of the European flag will be symbolically represented by twelve beams of light from the roof of St. Paul's Church, just as the 28 member states of the European Union will be part of the colorful performance, which will be accompanied by music.

According to current plans, the production is scheduled to run from May 23 through and including European Election Day. May up to and including the European election day on 26 May in each case with setting of the darkness to 1 o'clock in the morning in an automated show run off.

The background to Pulse of Europe's involvement is the concern that populist forces with national and anti-European tendencies could make significant gains in the elections and thus block important decisions in the EU Parliament in the future. "Our mission is therefore: save Europe by increasing voter turnout," says Daniel Röder.

Find out more at: www.pulseofeurope.eu