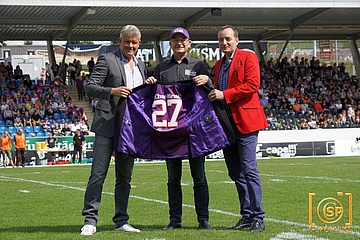 Klaus Rehm, President of the Frankfurt Universe, has received a special gift from his Frankfurt Footballers for his 60th birthday. Rehm can now wear the purple jersey with the No. 27 as the lining of his black jacket at all home and away games of the Frankfurt Universe. On the occasion of the home game, he was presented with his individual gift by the makers of the jersey jacket Stephan Görner and Sven Müller. More than 4,000 spectators celebrated not only Rehm's birthday, but also the 48:3 home win against Ingolstadt.

"With the jersey jacket we have discovered in a new sport," says Stephan Görner. "Until now, we were only represented in basketball, football and ice hockey with our jersey jacket.

Many well-known personalities already have it, by the way: Jürgen Klopp, Roberto Firminho both Liverpool, Thomas Müller from Bayern, goalkeeper legend Uli Stein or actor Mark Keller. All of them profess their allegiance to their club.

The jersey jacket can be ordered in many different colors and with jerseys of all sports at: <link http: www.triko-jackett.de _blank>Www.triko-jackett.de. Of course, this is also available as a blazer for women. (sm)