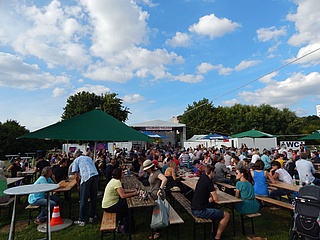 (kus) The traditional Stoffel was redesigned in 2017 due to complaints from residents. Not least because the public order office had to find a compromise between the two interests. This was also supported by the organizers of the Stoffel.

During the four weeks, noise level measurements were carried out several times, after the amplifier system was measured in at the beginning. None of the measurements showed an exceedance of the permissible immission guide value. Rather, it was to be noted that the organizers had rather fallen below the specified volume limit. No complaints about noise pollution were received by the public order office during the entire festival and the residents were also satisfied.

Stoffel 2017 is a good example of successful mediation between the various interests. Ordnungsamtsleiter Jörg Bannach sums up: "We have made great efforts in the run-up and have always been able to communicate with the organizer in a trusting and fact-oriented manner. From our point of view, the Stoffel 2017 was a successful festival. It is a pity that Petrus didn't also have a sympathy; in any case, it was not due to the disciplined organizer."