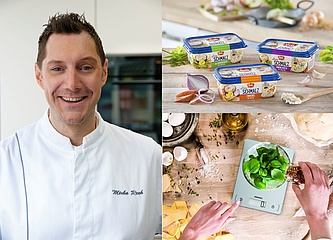 Lard is classically obtained from animal fat. However, the vegetable alternatives not only offer full flavor, they are also made exclusively from pure vegetable fats and oils. Like the three varieties of lard from <link https: www.deli-reform.de _blank>Deli Reform in onion lard, crackling-style lard and garlic lard. And even if some people might think of traditional home cooking when they hear the word lard - on closer inspection, the flavour carrier proves to be a true multi-talent on the stove. Not only the classical bread time becomes with lard the palate benefit - also with the cooking lard is versatile applicable.

This knows also television cook <link https: www.mirko-reeh.com _blank>Mirko Reeh: Lard may not be missing, especially at the cold season, in his kitchen. In his Frankfurt cooking school, he has been giving cooking classes for 20 years and has already served his dishes to top-class guests - while cooking universally, he combines international cuisine with down-to-earth, regional flavors and attaches particularly great importance to the careful selection of individual ingredients. Only high-quality products go into the pot with the TV chef - he likes to reach for plant-based alternatives, such as the purely plant-based lard varieties from Deli Reform.

To dive into the benefits of purely vegetable lard, Frankfurt-Tipp.de together with Deli Reform

is giving away a cooking course for two with celebrity chef Mirko Reeh on 23.2.2019 worth 250 euros

Travel expenses will be covered up to 150 euros.

In addition, we raffle for their own cooking experiments with lard on the home stove

.The Page Comfort 100 impresses with its purist design, the large LCD display guarantees problem-free readability and the practical add-on function for weighing different ingredients in a bowl makes baking and cooking even more fun.

To enter the prize draw, all you have to do is send a short message to <link>gewinnspiel-ffmtipp@trifels.de with the subject MIRKO REEH and your address.

Terms of Participation: The winners will be drawn on 11.02.2019 at 13:00 and subsequently notified by us. Employees of Trifels Verlag GmbH and their relatives are excluded from participation. Participation only from the age of 18. No correspondence can be entered into about the competition. The legal process is excluded. A cash payment of the prizes as well as the resale are not possible