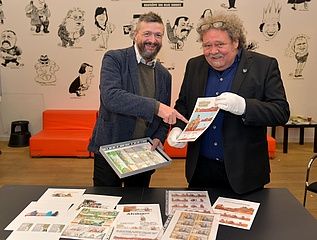 Comic artist Ralf König already announced at the Caricatura Museum Frankfurt's 10th anniversary gala that he would donate the picture stories read on this occasion to the museum. This week the time had come: The cartoonist and picture storyteller presented museum director Achim Frenz with his works "Evolution Brake," "Macbeth and Hoppenstedt," "David & Goliath," "Jell-O," &sbquo;&sbquo;Spring" and "Caricature Dispute."

Achim Frenz is thrilled: "Back in 2014, we were able to present these cartoons to a large audience alongside many others in our own exhibition of Ralf König's complete works. We are even more pleased that we can now include works by one of Germany's most successful cartoonists in our collection for our anniversary. Thank you, Ralf König!"

The Caricatura Museum Frankfurt's collection includes more than 7,000 originals by the draftsmen of the New Frankfurt School, as well as some 3,500 drawings by other cartoonists, including Felix Mussil and Marie Marcks.

Ralf König was born in Soest/Westphalia in 1960. After an apprenticeship as a carpenter, he studied free graphics at the Kunstakademie Düsseldorf. He published his first comics in 1979 in the Munich underground magazine "Zomix" and in the gay magazine "Rosa Flieder". König has been known to a wider audience at the latest since "Der bewegte Mann": The comic novel from 1987 served as the model for one of the most successful German films in cinema history, which at the same time re-founded the genre of German film comedy. König has since published numerous other works, and his books have so far been translated into 15 languages and won numerous awards (including the Max and Moritz Prize in 2010 for "Prototype" and "Archetype").

After classic adaptations such as "Lysistrata" and dozens of other volumes from the gay universe, König has more recently devoted himself to criticism of religion, especially fundamentalist Islam and Christianity.

Ralf König is on the advisory board of the Giordano Bruno Foundation. He lives and works in Cologne.

You can find even more info at: www.caricatura-museum.de