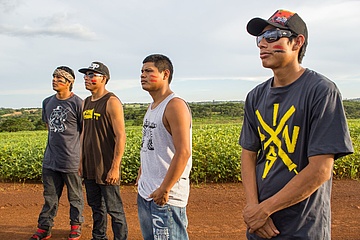 &sbquo;Freestyle in the Park' and Night of the Museums with indigenous Brazilian rappers Br&ocirc; MC's and Wera MC at Frankfurt's Weltkulturen Museum

(ffm) The Weltkulturen Museum has succeeded in inviting Br&ocirc; MC's, Brazil's first indigenous rap group, as well as Wera MC from the group Oz Guarani to Frankfurt in early May!

On Wednesday, May 2, and Monday, May 7, both from 4 to 7 p.m., rap talents from the Rhine-Main area can join the Brazilian rappers at the Open Stage "Freestyle in the Park".

Under the motto "Strong words - Strong soul. Indigenous Rap by Guaran&iacute; from Brazil", the Br&ocirc; MC's will perform three times during the Night of Museums on Saturday, May 5, at the Weltkulturen Labor am Schaumainkai 37. This is the first time that indigenous Brazilian rappers have performed in Germany, if not in Europe.

While Afro-Brazilians have been using the medium of hip hop to draw attention to their existence on the margins of society for 30 years, indigenous Guaran& rap isiacute; a fairly recent development that has received little international attention. The cultural heritage of the Guaran&iacute;, its threat and the spiritual meaning of the word are the driving forces of this musical form of protest.

Wera MC hails from the village of Tekoha Pyau. It is located in Brazil's smallest reserve, between the Pico do Jaragu&aacute; recreation area, which is undergoing increasing privatization, and one of the largest feeder roads from S&atilde;o Paulo, the Rodovia dos Bandeirantes, ironically named after the slave hunters who originally drove the Guaran&iacute; out of the area. There are major problems due to accidents with passing cars, the mass of abandoned dogs that take up residence in the village, and the extremely limited habitat. Wera MC makes this situation the subject of his songs: "We tell a lot of our reality. Many people come here and feel sorry for us when they see the state of our village, which is really precarious. We want to change that. We want them to know that our people have a lot to say, that a lot of things happened here that were poorly explained. We are here to tell the truth." (<link http: gaspargarcia.org.br noticias na-zona-norte-de-sao-paulo-o-rap-e-indigena _blank>

BR&Ocirc; MCs: Bruno Veron began rapping as a high school student in 2006, and in 2008 he formed the Br&ocirc; MCs with his brother Clemerson and two brothers Charlie and Kelvin Peixoto. The name refers to the fact that they are two pairs of brothers. Their mission is to use the medium of hip hop to bring attention to the situation of the Guaran&iacute;, even among the non-indigenous population, to dispel stereotypes and engage in dialogue with the national society.

"The lyrics of Br&ocirc; MCs and other Guaran&iacute; rappers are about life in the village or on the street, about what young people experience and observe: Violence, drugs, suicide, but also the beautiful things of village life. Lyrics are about dreaming, wanting, searching, poverty and suffering, conflict and protest. Even children compose sung poems and practice listening and memorizing from an early age. In the rap Koanguaga (Nos dias de Hoje; On Days Like Today), Br&ocirc; MCs establish a close connection with the sacred poems of the Guaran&iacute;, mburahei, translated simply as &sbquo;music'. In it, the mythic is accepted as the basis of the mundane."