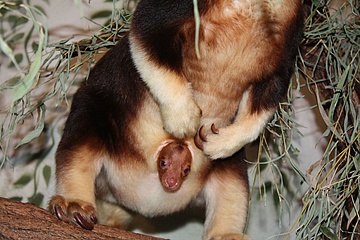 On April 24, 4-year-old Goodfellow tree kangaroo JAYA-MAY gave birth to a cub for the first time. The little one has been sticking its head out of its pouch for a few days now. Its sex is still unknown. But this does not cloud the joy and pride of the Frankfurt Zoo in the rare and precious offspring.

"There's a kangaroo sitting in a tree" - some might take this saying as a joke. But in fact, the little-known tree kangaroos are skilled climbers. Zoo director Professor Dr. Manfred Niekisch is very pleased that there were offspring of these somewhat curious-looking animals this year: "Breeding tree kangaroos in human care is only very rarely successful. In 1981 we were lucky enough to have the first offspring in Germany here in Frankfurt. A lot of tact and experience are necessary when dealing with these sensitive animals. Our keepers as well as our colleagues from Krefeld Zoo, who supported us with their know-how, have contributed significantly to this beautiful success." Across Germany, JAYA-MAY's cub is the only offspring of a tree kangaroo so far this year. Although this is the first time the young female has had offspring, she is caring and quite confident in her new mother role.

What sex the cub is is still unknown. It may also be some time before keepers can tell. At birth, tree kangaroos are about the size of a gummy bear and immediately hide in their mother's pouch, where they remain for up to six months before showing themselves for the first time. Even after that, they stay close to her side for up to two years.

4-year-old JAYA-MAY came to Frankfurt from Rostock in September 2015. Since tree kangaroos only come together to mate, she needed an acclimation period of six months before she could be left with nine-year-old SAMARAI, who has lived at Frankfurt Zoo since 2012.

Due to their reclusive lifestyle in the treetops of Papua New Guinea's rainforests, little has been known about goodfellow tree kangaroos (Dendrolagus goodfellowi buergersi). In the Red List of the World Conservation Union IUCN they are classified as "endangered". In their native country, they are particularly threatened by habitat loss - for example through coffee cultivation - but also by hunting. Goodfellow tree kangaroos are one of only six species currently listed in the Global Species Management Plan (GSMP). Organized by the World Association of Zoos and Aquariums (WAZA), the program organizes the worldwide breeding of endangered species with genetically balanced populations. This means that there are so few individuals of a species in zoos worldwide that long-term survival can only be ensured if the world zoo population as a whole is scientifically managed