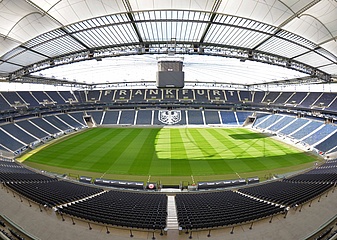 Ffm. With the signing of the lease agreement for the Deutsche Bank Park Stadium, a new chapter of joint cooperation began for the City of Frankfurt and Eintracht Frankfurt on June 30, 2020. The City of Frankfurt has undertaken to convert the Northwest Curve, thereby increasing the stadium's capacity to around 60,000 seats. The start of the first work is imminent.

"Many Frankfurt hearts beat for Eintracht Frankfurt and for many the stadium here in the Stadtwald is part of a long tradition and in many cases is still felt internally as 'our Waldstadion'. For us as the city of Frankfurt am Main, it is therefore particularly important that we give many people the opportunity to hopefully soon cheer on their own team live again in a full stadium," said Mayor Uwe Becker during his visit to the stadium. "The reconstruction and capacity expansion will further strengthen the connection between the people of Frankfurt and the traditional club. We believe in a time after the acute corona crisis and in many great home games in front of then almost 60,000 visitors."

The main reconstruction phase of the northwest curve will take place during the 2022 World Cup and will be implemented by the municipal company Sportpark Stadion. Currently, the two so-called media towers on the forecourt of the main stand have already been completely overhauled and the functional area in the basement of the west stand has been modernised. Eintracht Frankfurt, in turn, has already begun to invest in the digitalization of the stadium, as contractually agreed. A new video cube and new LED boards have already been installed.

"By leasing the stadium to Eintracht Frankfurt, we have created a win-win situation for both sides. We can already see the first fruits of the new cooperation today, and many more will follow. If the results of the matches are good enough, we will be even more than satisfied," said Markus Frank, head of the sports department.