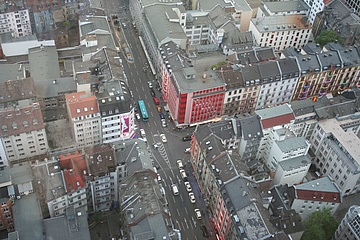 DIC Asset AG, one of Germany's leading listed real estate companies, today reopened the Kaiserpassage in Frankfurt's Bahnhofsviertel district in a festive atmosphere. Numerous guests from the worlds of politics and business, tenants and neighbouring business owners, as well as local residents, were able to see the fully modernised Passage for themselves. The Passage is fully open again from Thursday after around two years of modernisation, in which DIC as owner invested a good EUR 20 million.

DIC Asset AG's CEO Sonja Wärntges thanked the City of Frankfurt and all the authorities involved for their constructive cooperation. She emphasised that DIC and the City of Frankfurt had pursued the common goal of realising a concept for the Kaiserpassage that preserved and strengthened the character of the quarter and was economically viable, thus making the project a success. She also thanked all the planners and project managers involved, as well as the DIC staff. She extended a warm welcome to the new and old tenants and wished them successful business.

"As a company focusing on commercial real estate, we deliberately concentrate on cities and regions that we know well and in which we have local roots and a presence, such as here in our home city of Frankfurt", Wärntges emphasised in her speech and added: "Of course, our business success is measured against hard criteria, we are no different from other companies in this respect and we are doing very well in the challenging market for commercial real estate. But the Kaiserpassage shows that environmentally compatible urban and project development and economic success do not have to be opposites."

Markus Frank, Head of the Economic Department of the City of Frankfurt, said in his speech that the project had been a special concern for him and praised the result of the conversion: "With a huge and sustainable investment, DIC has returned a historic and sensitive location to the city and in particular to the Bahnhofsviertel: provided with new aesthetics while preserving the unique flair of the Kaiserpassage. With a modern local retailer and the return of the small, unique shops, the shopping arcade is bringing a bit of urban life back into the quarter. I would like to thank DIC very much for this: they are a great and prudent partner for the city of Frankfurt am Main!".

Finally, Lukas Sommer, member of the management of tegut GmbH, which operates a supermarket in the passage, spoke on behalf of all tenants and users of the passage and emphasised: "We are pleased to be able to be a mosaic stone in the restructuring around the main station. The special charm of Kaiserstraße, however, comes from the contrast between posh shops and erotic stores - a diverse clientele. We are happy to meet this challenge. We are proud to have created over 30 new jobs. Many of the employees come directly from the region around Frankfurt. These specialist employees keep the store going and will provide you with competent advice, because this is important to us."

Finally, those attending the opening ceremony had the opportunity to take part in guided tours of the Passage.