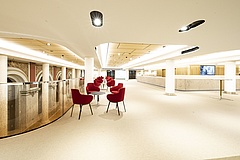 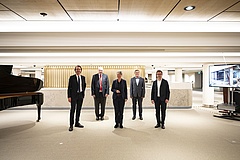 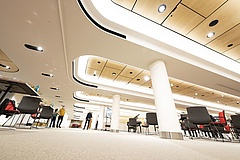 The Corona-related closure of cultural venues was used for a special project at the Alte Oper: an extensive redesign of the intermission foyer on the 1st floor of the building. With this, one of the central and most frequented places of the Alte Oper shines in a completely new splendour - just in time for the 40th anniversary of its reopening on Saturday, 28 August! With the redesign, the foyer also gets a new name: it is now called "Clara Schumann Foyer".

This means that for the start of the 2021/22 season, there will not only be a modern interval foyer, but also completely new opportunities for events and meetings. In principle, the redesign was made possible by the support of the Dr. Marschner Foundation and the Cronstett and Hynsperg Evangelical Foundation, which provided a donation totaling one million euros.

"Forty years ago, the Alte Oper opened its doors again for the first time," said Mayor Feldmann. "And just as it was the commitment of the citizens back then that made the reopening possible, it is now two foundations that have paved the way for the redesign of the intermission foyer. That is anything but a matter of course. Getting involved, asking oneself: What can I do - that is a tradition in Frankfurt. The generous donation from the Dr. Marschner Foundation and the Cronstett and Hynsperg Evangelical Foundation is also a commitment to our city. It acknowledges the importance of the Alte Oper for Frankfurt. It is an anchor point of the cultural scene in this city - and it deserves a foyer that does justice to this significance. The choice of name is also more than successful. It puts the spotlight on Clara Schumann, who was far more than 'just' Robert Schumann's wife. She was a pianist, composer, teacher - and above all, one of the defining figures in music history, far beyond her death in 1896."

Cultural Affairs Director Hartwig, builder and vice-chair of the Alte Oper's supervisory board, said, "I am delighted that we are able to open this beautiful, contemporary foyer in time for the 40th anniversary of the Alte Oper. A foyer that not only appears brighter, friendlier and more open, but which also, not least through the expansion of the usable space, takes into account the multifunctionality of the concert and congress hall to an even greater extent." And continued: "Following the tradition of the house to name its foyers after great musical personalities closely connected with Frankfurt, the name 'Clara Schumann Foyer' - after Paul Hindemith and Albert Mangelsdorff - is the first time a woman has been honoured. Clara Schumann, wife of the composer Robert Schumann, who died young, and herself the most important pianist of her time, settled in Frankfurt in 1878 and left her mark on the musical life of our city for many years as the 'first piano teacher' of Dr. Hoch's Conservatory."

The Intendant and Managing Director of the Alte Oper, Markus Fein, pointed out, "The new 'Clara Schumann Foyer' gives us a wide range of possibilities and will benefit our visitors as well as our cooperation and contract partners in the long term. We will use the new space for accompanying events, artist talks, smaller concerts and in the area of congresses and events, for example. The Alte Oper sees itself as a place of encounter. With the redesigned foyer, we will be able to make this even more tangible in a beautiful way."

The foyer has a more open, brighter feel compared to the previous room structure. By removing the cloakroom facilities, the walk-in area has been increased, and the foyer has also been given spatial separability as well as generous areas for media presentations. Architect Nicolai Steinhauser from the office Jourdan & Müller Steinhauser said about the concept and the designs: "The space-creating design is a task our office has been dealing with for a long time. We have met the challenge of creating a nucleus at this central location within the framework of the fire protection redevelopment that provides a design framework for the efforts of the coming years with great commitment. The new conception of the foyer takes up the existing structures and materials and interprets them in a new form, while giving the spatial ensemble of the Alte Oper a new accent in its independence."

The reconstruction work was carried out during the theatre holidays of the past two years, as well as partly during the pandemic-related closure of performances, and in close coordination with the general fire protection renovation of the Alte Oper. A sum of 1.4 million euros was raised for the redesign of the foyer, including 1 million euros in foundation funding and 400,000 euros of the Alte Oper's own funds. As part of the general fire protection renovation, the City of Frankfurt has invested additional funds of approximately three million euros for the foyer area.

The project management was in the hands of the Office for Construction and Real Estate of the City of Frankfurt (ABI), and the architectural firm Jourdan & Müller Steinhauser was commissioned with the concept and implementation.