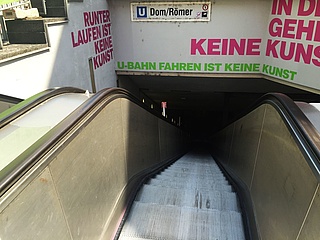 In2018, further work is scheduled at the station

(kus) Work around the Dom/Römer station continues. The exit facing the cathedral has been completely rebuilt in recent years and relocated to integrate with the rebuilt old town. In the house "Markt 8", which is part of the new Old Town ensemble, the stairs are now coming to the surface.

Among other things, the entrance/exit received new lighting, new cameras and speakers, rolling gates, and new stone and escalators. Following the completion of the final phase of construction, the escalators from the mezzanine level to the surface went into operation during the first weekend of December. However, it is anticipated that the exit will need to be closed again for three weeks in January 2018 as the connection to the newly constructed Coronation Walk will then be made. This closure period will include paving on the Coronation Path, the installation of snow guards and the installation of tactile elements directly in front of the station entrance, which will enable visually impaired people to find their way around.

The station will be temporarily out of service from mid-February to the end of July 2018. The reason is the comprehensive fire protection overall renovation of the low-lying facility. The U4 and U5 subway trains will not stop there during this time. In addition, there will be several closures of the line between Bockenheimer Warte and Konstablerwache lasting several days between the end of January and June. With the completion of the work in the summer, the new elevator should be in operation, so that the station will then be accessible barrier-free again.

Switching to the tram

During the decommissioning, tram lines 11 and 12 will run on the Altstadt route. Römer and Römerberg can be reached by the nearby stops Römer/Paulskirche and Börneplatz.

Christmas market and Shrovetide: U4 and U5 stop

Detailed information will be provided by the VGF on the work and the effects of the closures in the coming year. But important for all visitors to the Römerberg: the Christmas market can be reached with U4 and U5 as in previous years. Also on the carnival weekend, i.e. over Shrove Sunday, 11 February 2018, the trains will still serve the station as usual. The Old Town opening is scheduled for September 2018