Redevelopment of the old BATSCHKAPP site
from FFM Aktuell 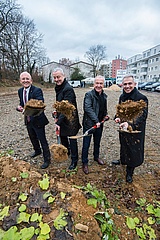 ABG is building 27 apartments and a convenience store

Mayor Feldman on the site of the former Batschkapp: 'New building an asset for the location' / Barrier-free living and green roofs / Site tour with Batschkapp boss Ralf Scheffler

(kus) It has been three years since the "Batschkapp" music club, founded in 1976, moved from the S-Bahn station in Eschersheim to its new home in Seckbach. Where legendary rock concerts and disco parties used to be celebrated, new apartments are now being built. ABG Frankfurt Holding has acquired the property along the railway line and is also building a new REWE convenience store here on the ground floor.

"This new building is an asset for the Maybachstrasse location," said Lord Mayor Peter Feldmann at the start of construction, "because ABG is not only building energy-efficient passive house apartments here, but also an attractive consumer market. This will significantly improve the local supply for the people in this part of Eschersheim," the city leader continued.

The ABG managing director Frank Junker described the project as a "construction challenge". Due to its location directly on the railway line, special attention had to be paid to noise protection and vibrations caused by train traffic. "Together with the team of architect Jo Franzke and the engineers of ABG, however, we have solved these challenges excellently and planned a very attractive ensemble here," Junker continued, "the living rooms and bedrooms were oriented towards Maybachstraße, so that in combination with the particularly soundproof passive house construction with triple-glazed windows, quiet living is ensured."

On three floors, the 27 apartments will be built above the consumer market on the ground floor and accessed from the spur road near the railway crossing. From there, residents will first access the supermarket's roof area, which is designed as a garden, via a stairwell or elevator to the three building entrances. These open up nine rental units each. The apartments on the first floor are accessible without barriers by wheelchair, and the living rooms and bedrooms as well as kitchens and bathrooms are also accessible without barriers here. "If the tenants' living circumstances ever change, these apartments can be easily converted to be wheelchair accessible," Junker said. Three two-, two three-, and one four-room apartment will be built on each floor, each with a northwest-facing loggia.

In the basement, the new building has an underground garage with 32 parking spaces for tenants and supermarket staff. This is also where the technical rooms, the combined heat and power plant, tenant cellars and bicycle parking spaces are located.

The entrance to the supermarket, which is also accessible without barriers and has been significantly enlarged with 900 square metres, will, as before, be on the side of the building opposite the neighbouring Eschersheim sports club. Goods will also be delivered from Maybachstrasse via the courtyard on this side. ABG plans to complete the new building by March 31, 2018, with the REWE store ready for occupancy one month later