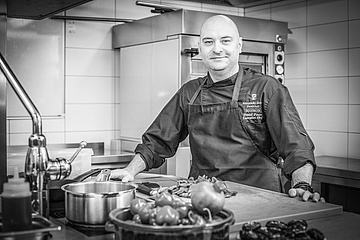 The restaurants of the Kempinski Hotel Frankfurt have a new head chef: Daniel Pause has been leading the kitchen team since the end of February. He takes over the position from Stefanos Melianos, who joined the Kempinski kitchen in Frankfurt three years ago and is now taking on new responsibilities in Vienna. Pause will make his culinary debut with the summer opening of the Levante restaurant, which will once again offer Lebanese and Oriental specialities from 9 May after the winter break.

Daniel Pause has been associated with Kempinski Hotels since the beginning of his professional life: With only a short interruption, he has been with the luxury hotel group since 2000. He knows the Kempinski Hotel Frankfurt particularly well; he stood behind the stove there for almost 13 years alone, the first time as Commis de Cuisine. After working as Chef de Partie, Junior Sous Chef and Sous Chef, he took on his first position as head chef at the Kempinski Hotel Adriatic in Savudrija, Croatia, in 2014. Three years later, he moved to the Kempinski Hotel Portoroz in Slovenia, where he also served as head chef until his move to Frankfurt. "Daniel Pause has pursued his career in a very focused and consistent manner, which impresses me," notes hotel director Karina Ansos. "I am very happy to have him back here at the hotel now and I am looking forward to hearing his ideas."

The 38-year-old Daniel Pause is responsible for all restaurants at the Kempinski Hotel Frankfurt. These include the EssTisch, the historic Torschänke, and the NIU | Asian Steakhouse. "I am very attracted to the variety of gastronomic offerings at the Kempinski Hotel Frankfurt," says Pause. "It is close to my heart to highlight the culinary strengths of the individual outlets even more - an exciting task for a chef. At EssTisch, I want the international to take a back seat, I want to move the philosophy the &sbquo;Best from the Region' more towards fine dining with German dishes."

And there's another personnel change to report: Mohamed Agouni is moving up from sous chef at Lebanese restaurant Levante to head chef. The seasonal restaurant reopened May 9. The menu has been revised by Agouni himself; here you will now find, for example, cod Essaouira style with argan oil, fig, saffron glace, parsnip and chickpea. Or: date pigeon with maklube rice, shallots, raisins and Mediterranean vegetables. Vegetarians can look forward to an oven-baked cauliflower with tomato, flamed leek hearts, salt lemon, cinnamon, cilantro and tahina yogurt.

With the opening comes a new restaurant manager: Igor Lacko. A native of Slovakia, Lacko has worked in five-star hospitality for years, including at the Cliff Hotel Rügen, the Jumeirah Frankfurt and the Villa Kennedy in Frankfurt.

Reservations could be made by calling 069 389 88 680 or emailing levante.frankfurt@kempinski.com.