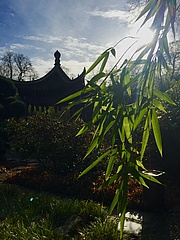 Since a fire on the night of 01 June 2017, which killed the beautiful wooden water pavilion, the Chinese Garden in Bethmannpark has been closed to the public. Now there is finally good news: This wonderful oasis in the north of Frankfurt can probably be reopened next year. Environment department head Rosemarie Heilig got the green light for her proposal to rebuild the water pavilion in the city parliament on Thursday, September 27.

"We still had contacts from the past and we can hire the same company again that created the Chinese Garden in 1989 and renovated it in 2007," Heilig said. "In our globalized world, there are still amazing examples of consistency over decades - for Frankfurt, this is a great stroke of luck."

As early as 1989, the components for the pavilions and bridges had first been prefabricated in China and then delivered to Frankfurt in sea containers. In a construction period of just five months, artisans and workers from the Middle Kingdom then laid out the 4,000-square-meter "Spring Flower Place," which also includes a pond and waterfall, in Frankfurt.

After the decision of the city council, the green space office can now award the contract for the reconstruction. The cost of about 1.3 million euros will be covered by the city's fire insurance. It will take about four months to prefabricate the components. Another four months will then be needed for the reconstruction on site. If no long periods of frost intervene, the people of Frankfurt will have their beloved gem back in about a year