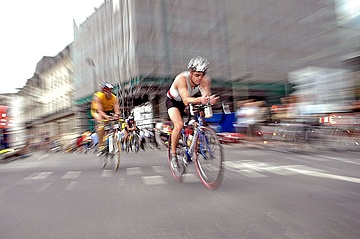 On Sunday, August 5, the big Frankfurt City Triathlon will take place again. <link https: www.frankfurt-tipp.de veranstaltungen s event frankfurt-city-triathlon.html _blank>You can find all info about the run HERE in our event calendar. When in and around the city around 2,500 athletes are on the move, this naturally leads to some traffic obstructions, to which also buses and trains must give way. This affects the period from 6 a.m. to 1 p.m.

subway within the city, suburban railway to the surrounding area as an alternative

As an alternative to the car Frankfurt subways are recommended on Sunday, which run according to schedule. Limited S-Bahn services will be available on the last day of the S-Bahn tunnel closure.

Detours and disruptions to trams and buses

First get informed, then get going!

Passengers should find out about their travel options early and look for alternative routes in Frankfurt's dense public transport network. The timetable information on the Internet at <link http: www.traffiq.de _blank>

takes the changed timetables into account. The RMV service telephone at 069/24248024 also provides information about the best travel option around the clock.

The changes to trams

The tram line 11 cannot run between the main station and Börneplatz. It will only operate in the west of the city between Nied Kirche and Heilbronner Straße at the main station. Tram line 12 does not run between Willy-Brandt-Platz and Börneplatz and only shuttles between Rheinlandstraße and Willy-Brandt-Platz. In the east, line 11 runs from Fechenheim Schießhüttenstraße to Börneplatz and then continues as line 12 via Konstablerwache and Bornheim Mitte to Hugo-Junkers-Straße and in the opposite direction.

The changes to buses

Line 59 will only run between Griesheim Bahnhof and Erzbergerstraße and between Cheruskerweg and Bingelsweg from approximately 7 a.m. to 12:30 p.m. Line 61 will run until 12:15 p.m. coming from the airport from Gateway Gardens via the A5 and Niederräder Ufer to Oberforsthaus. In the opposite direction, buses will run from Triftstraße on the normal route to the airport. Line 78 will start at 12:39 from Lyoner Straße and at 12:57 from Südbahnhof.