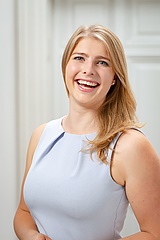 The Rheingau will be a guest in Frankfurt in the next few days and transform the Freßgass into the Rheingau wine market. Katharina Bausch, the Rheingau Wine Queen 2018/19, will also be there. The Rheingau Wine Market is one of many events at which she is representative in her function as Wine Queen. But it is also a very special one that Bausch, like her predecessors, likes to visit. But it is certainly not the most important date for the young woman, because on 21. and 27.9.2019 the big wine gala will take place in Neustadt, where the German Wine Queen will be elected. And Katharina Bausch wants to bring this title to the Rheingau.

First of all she has to convince on 21.09.2019 in the preliminary round and then fight with the last 6 candidates for the crown of the German Wine Queen on 27.09.2019 also in Neustadt an der Weinstraße for the final. In order to overcome this hurdle, Katharina prepares herself intensively. During the show you have to answer tricky technical questions, give interviews, make spontaneous speeches and moderate wine tastings. In order to master these, Katharina Bausch and her coach train the situation in order to strengthen her likeable appearance and convince the jury with charm and quick-wittedness. In addition, the young winemaker studies viticulture & oenology at the Geisenheim University of Applied Sciences and thus has the best prerequisites to answer the technical questions.

The first impression counts. For this reason, a SWR camera team recently visited the Rheingau Wine Queen in her hometown of Hattenheim and filmed her everyday life.

To introduce herself and the Rheingau in a portrait at the election, Katharina stood in front of the camera these weeks. The script shows an excerpt from Catherine's life. The three-minute feature films of all twelve candidates are an integral part of the programme. For the short portrait, SWR editor Wolfgang Junglas wants to show as many facets of the candidates as possible. Last but not least, the fan bus with friends and family of the Rheingau resident will actively support Katharina on site and carry her on with a lot of jubilation.

The election gala with Katharina Bausch and her eleven candidates for the German Crown will take place on 21 January. Only one out of 12 candidates may take home the golden crown and represent the German wine as ambassador worldwide. And since Frankfurt not only has a very special relationship to the Rheingau during the Rheingau Wine Market, we are keeping our fingers crossed for Katharina Bausch! www.rheingau.com/wein