Robbie Williams is back - in July 2017 also in Frankfurt!
from FFM Aktuell 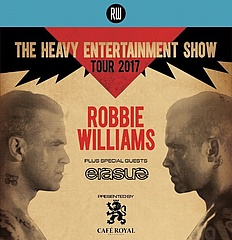 With his new album "The Heavy Entertainment Show", now in its eleventh year, Robbie Williams once again proves what a versatile musician he is. Catchy pop songs, soft ballads, big anthems, biting lyrics - he offers all this to his fans, who promptly catapulted the album to the top of the charts again. In his native Britain, it even put him on a par with Elvis Presley as the artist with the most number 1 albums. Respect!

The success doesn't come by chance either, as many of the new songs prove. For example, "I love my life" is a really beautiful catchy tune, "Marry me" is guaranteed to be the soundtrack for many a marriage proposal in the near future and "Sensational" really hits the spot - it will be an absolute hit live! Fans will soon be able to see for themselves, because with these new songs and many classics in his luggage, Robbie Williams will be going on tour again in 2017! And that will also take him to Frankfurt, where he will be performing at the Commerzbank Arena on 19 July.