Round table city and district marketing: Zeil should become a model for the city center 2.0
from FFM Aktuell 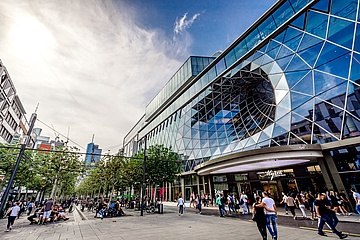 Let's be honest: A visit to the Zeil has not been a pleasure for quite some time. Even though it is one of Germany's largest and best-known shopping streets, the Zeil was losing more and more of its appeal even before the pandemic - a trend that was further fueled by Corona. The important question now is how to counteract this. In this context, it should be clear that it is not enough to lure people to the city center with special promotions such as discounted local transport fares. On Tuesday, February 1, is for this reason for the now sixth time the round table city and district marketing met to exchange ideas about the future of the city center.

"Corona has slowed down the inner cities - and at the same time set a dynamic in motion," said the city leader. "We are currently witnessing nationwide how the debate about the future of the major shopping streets is picking up speed. The Zeil is one of the largest shopping streets in the country. We want to make it a model for the inner city 2.0. How do we maintain, how do we create lively neighborhoods, meeting places, taking into account ecological, social and economic concerns? The new coalition agreement contains numerous goals and measures for Frankfurt's inner city. We can only achieve these if we get involved with our different perspectives."

The "Frankfurt Plan" he initiated has shown what is possible when everyone pulls together, Feldmann said: "Within a few weeks, we have launched a major package of measures to revitalize the city center in 2021 - in close cooperation with business and associations. Above all, the expansion of outdoor catering was a success that we are determined to maintain. We want to build on this and now look to the medium and long term. This will involve topics such as the future of the Hauptwache area - and the impetus that will come from the opening of MOMEM in April. The design of the terror bollards, a possible night market and a digital visitor guidance system are also things we want to talk about."

Support for restaurants and retailers were also key topics at the roundtable. This could include continuing to provide larger areas for outdoor dining and special promotions on weekends. But of course, this alone will not be enough to make the city center more attractive. For Councilman Stefan Majer, for example, it is important to create "above all, even more attractive meeting spaces for all social activities in the immediate vicinity." As an example, he cited the redesign of the car-free Main Quay, which is to be planned. "These are key measures for the revitalization of the city against the increasing trade in the virtual space from home," Majer said.

"The vibrancy of the city center is important for everyone and the Corona pandemic has led to serious cuts in public life. In this respect, the craft sector welcomes the proposed measures and their extension. Bakeries, butchers and confectioners also benefit from increased foot traffic. In this respect, we support measures that lead to greater dwell time and more quality of stay in Frankfurt's city center," emphasized Chamber of Skilled Crafts President Susanne Haus.

Representatives of the DEHOGA district association in Frankfurt once again emphasized that the hospitality industry was one of the worst affected sectors of the pandemic. The companies urgently needed reliable prospects to survive the crisis financially and mentally. "The continuation of the generous and unbureaucratic expansion of outdoor catering areas for the next few years would be an important signal for our industry," emphasized Robert Mangold. "The difficult situation will be with us for some time. It is all the more important to support the gastronomic infrastructure in order to remain competitive in the future with a lively and exciting gastro scene in Frankfurt compared to other metropolises," explained the chairman of the Frankfurt District Association.

"The Zeil, the heart of Frankfurt, must be revitalized. There one is with the round table on the right way. That radiates then at the same time also positively into the districts," added Ernst Schwarz, chairman umbrella organization of the Frankfurt trade associations.

The next meeting is scheduled for the end of summer. In the meantime, the topics will be followed up at the working level.