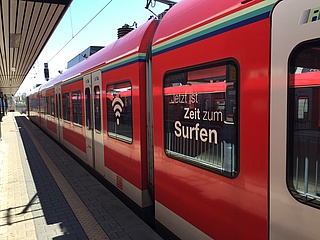 The construction project is not yet completed and there will also be in the coming months from time to time closures. But the good news is that rail commuters can now breathe a sigh of relief: after twelve long weeks of partial and full closures, trains will once again be able to use the entire route between Frankfurt (West) and Bad Vilbel from Monday, September 5, at around half past four in the morning. Deutsche Bahn (DB) has completed the construction work planned during the closure break on schedule. The first train on the freshly reopened line is scheduled to be the S6 from Bad Vilbel in the direction of Frankfurt at 4:35 am.

This means that an important milestone has been reached for the 'Own tracks for the S6' project, as Gerd-Dietrich Bolte, Head of Infrastructure Projects Central, DB Netz AG explains: "The last few weeks have been a real tour de force for everyone," says Bolte. "Not only for the construction team, whom I would like to expressly thank for their commitment and dedication, but also for the affected travelers, residents and commuters. I know that we have put them through a lot in recent weeks due to the restrictions on train traffic associated with the closure. For your patience and understanding, therefore: thank you very much."

The expansion of the tracks between Frankfurt (West) and Friedberg is one of the most important infrastructure projects in the Rhine-Main region. In the future, the S6 will be able to travel on its own tracks and run faster, more regularly and more reliably, independently of local and long-distance traffic. A total of 13 kilometers of new track, eight new rail, road, footway and cycle path overpasses, 19 kilometers of noise barriers and a new stop in Frankfurt Ginnheim will be built between Frankfurt (West) and Bad Vilbel by the end of 2023. In order to be able to carry out as much work as possible in a compact way, a total closure period of 12 weeks was necessary this summer. First, there was a four-week partial closure in June, during which the trains could continue to run on a single track. This was followed by an eight-week full closure of the line from July 9 to September 5. During this time, buses ran instead of the S-Bahn, and regional and long-distance traffic was rerouted. For all those who depended on the train, this sometimes meant longer journeys to work and other inconveniences.

In order to be able to keep to the tight construction schedule during the closure period, DB has been working flat out over the past few weeks in several shifts during the day and in many cases also at night. Among other things, it has completed the embankment and the retaining walls on the Nidda between Frankfurter Berg and Bad Vilbel and laid the new mainline tracks, including control and safety systems, overhead lines and switches, between the Frankfurter Berg and Bad Vilbel stops. The new tracks will connect the Bad Vilbel, Bad Vilbel Süd, Berkersheim and Frankfurter Berg stops over a length of around nine kilometers. From 2023, they will be reserved exclusively for long-distance, regional and freight traffic. Until then, they will also be used temporarily by the S-Bahn. So that the passengers of the S-Bahn can get on and off without problems and, above all, barrier-free during this transitional period, DB has built temporary platforms in Bad Vilbel Süd, Berkersheim and Frankfurter Berg.

In Bad Vilbel, DB has been dismantling the old Nidda bridge in recent weeks and replacing it with a new bridge. In order to be able to carry out the complex construction work, a working platform was specially erected above the riverbed. The water of the Nidda had to be diverted through pipes under the construction site for the work.

DB has also made significant progress with construction work in the remaining section of the line - mainly in Eschersheim and Ginnheim - in recent weeks. For example, the level crossing at Lachweg has been closed and dismantled, and the new crossings for pedestrians and cyclists "Am Grünen Graben" and "Nußzeil/Maybachstraße" have been completed.

Construction work for the dedicated tracks for the S6 is now continuing while trains are in operation. The complete commissioning of the new tracks is planned for the end of 2023. Until then, the line will probably have to be closed a few more times in the spring and at the end of next year.

The rail project "Own tracks for the S6" is part of the infrastructure development program Frankfurt RheinMainplus, which is jointly driven by the federal government, the state of Hesse, the city of Frankfurt am Main, the Rhine-Main Transport Association and DB AG for the mobility turnaround. For more information, visit: www.FRMplus.de