Sad news: Goetheturm has burned down
from FFM Aktuell 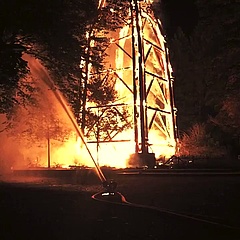 For Frankfurt residents, this is very, very sad news: On Thursday night, the Goetheturm, one of the city's most popular landmarks, burned down. Built in 1913, the tower could not be saved and unfortunately collapsed. The fire, which broke out in the early hours of the morning for reasons as yet unknown, was so severe that the fire brigade refrained from attempting to extinguish it and allowed the tower to burn down in a controlled manner. In the process, an attempt was made to prevent the flames from spreading to the Caf&eacute; located next to the tower and to the city forest. It is still unclear whether it was arson. What is clear, however, is that with the tower, which had just been renovated in 2014, we have lost a popular excursion destination and a real piece of Frankfurt.

How much the people of Frankfurt loved their Goetheturm is clear from the numerous comments on social networks - and in the fact that calls for its reconstruction were quickly heard. Politicians from various factions also seem to agree on this: Frankfurt without Goetheturm? NO!

And so Lord Mayor Peter Feldmann was able to announce at 12:30 that a donation account has already been set up. Anyone who would like to help ensure that the Goetheturm rises again as quickly as possible can make a contribution to this at:

We will keep you updated!