Safe on the bike through Frankfurt: Extended winter service on bike paths
from FFM Aktuell 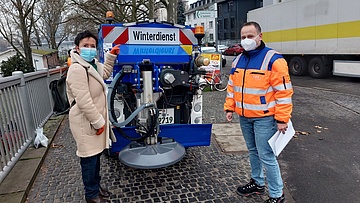 Whoever cycles through Frankfurt on his bike in winter has certainly experienced this. When it snows, the roads are cleared for the cars, but often the resulting piles of snow end up on the bike paths, which makes cycling not exactly safer. However, to ensure that Frankfurt remains attractive to two-wheelers during the cold season, FES has been running safety checks on bike paths for the first time since the start of the 2021/22 winter maintenance season. Five special tours have been designed at the city cleaning service's operating sites to ensure that safe cycling is possible throughout the winter on the main roads and on the connecting roads between the city districts. Through this new winter service, for the first time, sections separated from the roadway and bike lanes on sidewalks, which are considered part of important pathways, are also pretreated.

As soon as winter road conditions are announced, the new tours - between 26 and 38 kilometers long, total circumference 153 kilometers - are driven from 5 a.m. simultaneously with the main roads. Winter conditions are all forms of slippery conditions, i.e. when moisture in the air or on the ground coincides with a temperature of two degrees or less. When necessary, the bike routes are then gritted with brine, a mixture of pre-wetted salt and water. Within two and a half hours, i.e. by 7:30 a.m., they are prepared for bicycle traffic and the safe journey to work, school or a stroll through town is guaranteed.

The city of Frankfurt makes the expansion of winter road maintenance on cycle paths cost around 200,000 euros a year. This covers the expenses for personnel and the purchase of five new, narrow gritting vehicles. Climate department head and FES supervisory board chairwoman Rosemarie Heilig says: "The municipal winter road clearance service naturally also supports the traffic turnaround in our city. I am pleased that it has been possible to make such an offer to the many cyclists this winter. The new service sets a further incentive to switch to the bike and thus to actively reduce exhaust fumes and traffic noise in our city."

Mobility Department Head Stefan Majer adds that the positive trend, which in recent years many Frankfurt residents and also many commuters have switched to the bike and especially in the winter is driven more and more bicycle, must be necessarily consolidated. This new winter service is an important first step in this direction. FES Managing Director Dirk Remmert, who presented the new tours, added: "In the transport policy of the city of Frankfurt, a shift in importance towards more sustainable mobility with bicycles and e-bikes has been emerging for years. This is already shown by the recently implemented reallocations in the traffic area. It is only logical for us to gear our services to this. I am pleased that we can offer Frankfurt residents an improved service this winter with the help of our partners in the Environment Department."

Bike paths, as part of the public transport network, have also been processed by the FES winter service in the past. Preventively, however, this was done mainly where bike paths share the roadway with the main roads, because there they were and are supplied by the large clearing and gritting vehicles, including in the city center. Also particularly slippery susceptible places such as bridges or particularly strongly frequented cycle tracks were already approached and pre-treated also so far purposefully.

A large-scale reworking of the total of about 400 kilometers long, asphalted bike path network in Frankfurt there was and still is in so-called full operations, so if, for example, when snow falls the entire city cleaning - about 300 employees - for the winter service is deployed. Such an operation usually lasts a whole day, or longer depending on the weather. Priority is also given according to importance.

The tours at a glance

Tour 1 rounds Sachsenhausen - from the Theodor-Stern-Kay along Stresemann- and Kennedyallee to Niederräder Landstraße. South the Mörfelder Landstraße to the Oppenheimer Landstraße. In addition, on both sides a large part of Darmstädter Landstraße. To the north, the route along Schaumainkai and Sachsenhäuser Ufer to Osthafenbrücke. Back then on the northern side of the Main via Sonnemannstraße.

Tour 3 starts in the station district and first connects the Gutleutviertel (via Gutleutstraße), the Gallus (via Mainzer Landstraße) and the Europaviertel (via Europaallee). Furthermore, the western Alleenring is served via Hauptbahnhof and Messe: Friedrich-Ebert-Anlage, Senckenberganlage, Zeppelinallee. Along Miquelallee and Hansaallee, the route circles Grüneburgpark and the Westend university campus. Via Reuterweg and Mainzer Landstraße the circle is closed.

Tour 4 establishes the connection from Heddernheim to the White Stone. The upper part of the Eschersheimer Landstraße is taken off, also the Hügelstraße to Ginnheim and to Eckenheim (Jean-Monet-Straße and Elisabeth-Schwarzhaupt-Anlage). In the Dornbusch is also the Marbachweg in the program, and to Giessener Street.

Tour 5 finally serves the west, and there especially the connections of Höchst and Unterliederbach (Königsteiner Straße), the Höchster Farbenstraße to just before Sindlingen, the Leunastraße and Leunabrücke, Schwanheim then the Schwanheimer Brücke with all access roads, from the north side then through Nied Kirchweg, Mainzer Landstraße back to Höchst. The conclusion is then the Kurmainzer Straße to just before Sossenheim and back.