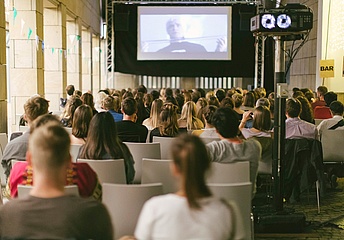 The SCHIRN Kunsthalle invites you again this year, after the great success last summer, to three evenings in August for open air cinema. This time the films are all about the upcoming exhibition "We Never Sleep" (September 24, 2020 - January 10, 2021). On Wiesenhüttenplatz (near the main train station), classics of the agent film will be shown from Wednesday, August 19 to Friday, August 21, 2020, at 8:30 p.m.

Because the exhibition will highlight the fascinating power of espionage as a source of artistic inspiration. The Schirn is showing paintings, photographs, video works, sculptures and installations with works by around 40 contemporary artists. The image and myth of the spy has been significantly shaped in popular culture by spy novels and agent films. The exhibition will therefore also feature a selection of original film posters as well as excerpts from well-known spy films. And as a small appetizer, three exquisite spy films are already on view.

The international film program of the Schirn Open-Air Cinema will highlight the many facets of this genre. The films Das Leben der Anderen (2006), Alphaville, une &eacute;trange aventure de Lemmy Caution (1965) and The Conversation (1974) will be shown. The program will be accompanied by animated pre-films from the ARTE series "Female Spies", in which former female agents talk about their intelligence missions.

All films will be shown in the original language, Alphaville and The Conversation with German subtitles. The pre-films of the ARTE series start at 8.30pm, the respective feature film at 8.45pm. From 6pm the YokYok Kiosk team will be offering cool drinks and snacks. Admission is free.

In order to make it safe to visit the Schirn Open-Air Cinema even during the Corona pandemic, comprehensive protection and hygiene measures have been developed in coordination with the relevant authorities. Among other things, the distance rule of at least 1.5 meters, the sneezing and coughing etiquette must be observed and contact details must be left on site.

ALL FILMS IN OVERVIEW

Director Florian Henckel von Donnersmarck's award-winning drama is dedicated to the systematic surveillance and control strategies of the GDR state: Stasi captain Gerd Wiesler, loyal to the line, is assigned to shadow playwright Georg Dreyman and his partner, actress Christa-Maria Sieland. The intimate insights into the couple's personal lives make him increasingly lose his distance to his surveillance victims, and the separation between perpetrator and victim is dissolved.

PREVIEWS OF THE ARTE SERIES "SPIONAINNES": "SPIONAGEABWEHR &Agrave; LA FRAN&Ccedil;AISE" AND "IN THE SERVICE OF THE KGB"

In Jean-Luc Godard's neo-noir film, private detective Lemmy Caution sets out to find missing agent Henry Dickson, who has disappeared in the town of Alphaville. Alphaville is under the control of a central computer that follows the law of logic and suppresses the feelings and free thoughts of its inhabitants. Godard's dystopian narrative combines stereotypes from crime and spy films with science fiction elements and critically points to the dangers of state surveillance strategies.

PREVIEWS OF THE ARTE SERIES "SPIONNES": "THE LADY AND THE DICTATOR" AND "RELATED TO THE CIA"

Surveillance expert Harry Caul is hired to stake out a young couple and witnesses a murder in the process. Francis Ford Coppola's thriller depicts the moral development of its main character, who increasingly suffers from guilt and paranoid traits. The interweaving of the cinematic narrative with the surreptitious audio recordings of surveillance raises questions about the boundaries of public and private life.

PREVIEWS OF THE ARTE SERIES: "THE GIRL AND THE CHIEF SPY" AND "HOLIDAYS WITH THE MOSSAD"