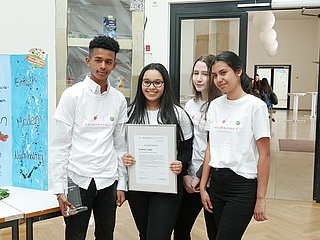 Congratulations to the student team "Die SaMS" from Schule am Mainbogen won the Schools Challenge Frankfurt competition. The joint project of J.P. Morgan and IW JUNIOR has as its goal to inspire students for STEM topics, to show them career perspectives and to arouse interest for economic contexts among young people.

The team "Die SaMS" was able to win the first Schools Challenge in Germany. The students convinced with their project idea of the SaMS-Foodbox. This is a publicly accessible refrigerator in downtown Frankfurt that can be filled by anyone with food that would otherwise no longer be eaten and thus end up in the trash. In times when more and more emphasis is being placed on sustainability and senseless waste is to be avoided, this is a really great idea. The team convinced the jury with their realistic prototype, the scope of the idea and with their cohesion in the group.

The winning team from Frankfurt will fly to London in June to meet the winners of other international Schools Challenges. This is because the Challenge will also be held in Hong-Kong, London, Milan, Paris, S&atilde;o Paulo and Singapore on the same principle. The winning teams from London, Milan, Paris and Frankfurt will be invited to visit London in June 2019. There, they will present their ideas to the other teams and participate in various activities to deepen their STEM understanding. The project is jointly run by J.P. Morgan and IW JUNIOR gGmbH. In the 2018/2019 school year, the project will be offered for the first time in Frankfurt at the Schule am Mainbogen and the Paul-Hindemith-Schule.

The closing event was opened by City Councilor Elke Sautner. She addressed an encouraging greeting to the students. They then presented their business ideas at presentation booths. During an interview, the five-member expert jury led by Dorothee Blessing, Managing Director of J.P. Morgan Germany, asked the young people about their business ideas and prototypes.

After the jury interviews, the students presented their prototype on stage. Here, all teams demonstrated their inventive and team spirit. Afterwards, Reza Solhi (founder of Heartbeat Edutainment) and Jan Weber (apprentice at Provadis) provided outlooks and perspectives for the young entrepreneurs before the jury chose the winner.

About the Schools Challenge

In the Schools Challenge Frankfurt, J.P. Morgan and IW JUNIOR offer Frankfurt's 8th-10th grade students the opportunity to develop their own business ideas in the areas of energy, climate and the environment in order to make their city an even more livable place. The aims of the Schools Challenge include promoting career and study orientation among young people, strengthening skills such as personal responsibility and the ability to work in a team, and building up business and start-up knowledge. The project can be offered by schools via the elective area or also as an extra-curricular AG for the period of one school year and can therefore be integrated into the school day without any problems.

You can also find more info at: www.iwjunior.de