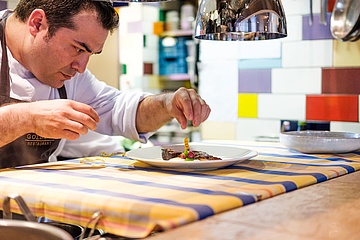 Gourmets take note: From October 14 to October 27, the second Restaurant Festival Frankfurt will take place on 14 evenings. Participants can experience a culinary voyage of discovery through Frankfurt in 14 locations - a tasty and exciting thing to do given the city's truly multifaceted gastro offerings!

After almost all evenings were sold out at the premiere in 2016, a second edition of the festival was quickly decided: "Last year's premiere was a complete success with almost 600 visitors. But even more important to me than the numbers is that we met many happy guests who share our passion for indulgence. We want to build on that this year. Together with the city of Frankfurt, the Genussakademie and the Initiative Gastronomie, we have also launched the Kochtalent, a competition for young chefs, in order to also give young talent a platform," explains Daniel Tobias Etzel, Managing Director of WAOH GmbH. WAOH organizes the Restaurant Festival.

Frankfurt's best up-and-coming chefs will cook for the "Kochtalent 2017" award at the opening of the Restaurant Festival on Sunday, October 15, in the former Abs Hall of Deutsche Bank under the direction of TV chef Reiner Neidhart. The guests will be part of the jury and experience an evening of culinary surprises.

In addition to 1000 euros in prize money, the winner will receive a wildcard to participate in the regional competition of the S. Pellegrino Young Chefs Award 2019 in Frankfurt.

"In the competition for skilled workers, the attractiveness of the location plays an increasingly important role. I am very much looking forward to discovering more culinary treasures in surprising places - especially as a project to promote young talented chefs from Frankfurt is also included in the programme for the first time," says City Councillor Markus Frank, Head of the Department of Economics, Sports, Security and Fire Services of the City of Frankfurt.

The organizers of "Kochtalent 2017" are the City of Frankfurt, the communications and event agency WAOH, the Initiative Gastronomie Frankfurt and the Genussakademie.

The Restaurant Festival Frankfurt presents with the participating restaurateurs two weeks of culinary arts at a high level - with many facets and adventures. Cost per menu including wine accompaniment: 79 euros to 229 euros.