SHADOWLAND comes back to Frankfurt
from FFM Aktuell 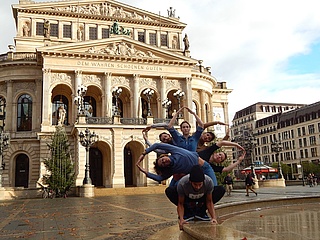 It's time again to immerse yourself in a world full of magic and enchantment: SHADOWLAND is coming back to Frankfurt in 2019. The PILOBOLUS Dance Theater from the USA, founded back in 1971, has landed the really big coup with this magical story. After the company was able to enchant an audience of millions around the world with its wonderful mixture of dance and shadow theatre through a memorable performance at the Oscars in 2007, "Shadowland" finally brought it to the very big stages of this world. The play, created in collaboration with Steven Banks, the head writer of "Spongebob Squarepants", and singer/songwriter David Poe, has now thrilled over 1.5 million visitors in 34 countries on four continents. And there's no end in sight to the success story, because now the original is returning for another tour!

Whether you've seen "Shadowland" before or you've only seen snippets on TV so far, you'd better secure tickets for the 2019 guest performance fast. For here you will be whisked away completely from reality for 90 minutes with an imaginative mix of modern dance performance, ballet, acrobatics and fascinating shadow theatre. Using only the human body, PILOBOLUS manages to create entire worlds and magical figures that immediately catapult the audience into this unique dream world. The story centers around a girl who is trapped in the land of shadows and tries to find her way back to her world. On her journey, she encounters all sorts of strange and dangerous creatures, and when she is also turned into a dog, returning seems nearly impossible.

This story only loosely follows a classic narrative structure. Completely devoid of words, carried only by dance and music, the journey through Shadowland is told as exactly what it is: a dream. The laws of logic are suspended, here even the impossible is possible. And how the dancers of PILOBOLUS realize this on stage is simply magnificent. No matter whether their shadows melt behind the white curtain into fascinating, poetic or humorous figures and objects, or whether they reveal their skills directly in front of the audience, the elegant, graceful and sometimes almost acrobatic performances are something very special.

This also became clear at a press event, where some members of the ensemble gave a small sample of their body and dance art in front of the Alte Oper, where SHADOWLAND will guest from 24 to 28 April 2019. It became clear again: live, this performance has a particularly intense effect. <link https: www.frankfurtticket.de tickets shadowland-2.9516 _blank>So, secure tickets HERE now and then immerse yourself in a wonderful world of shadows and magic.