Shopping with D-Mark on Berger Straße
from FFM Aktuell 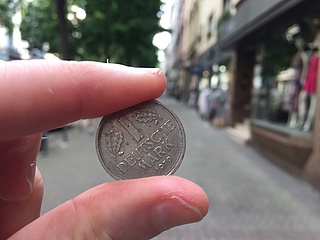 Do you still have D-Mark somewhere that you haven't exchanged yet? Are there still coins and notes lying around somewhere that you would like to spend? Then you are not alone, because there are still over 12 billion Deutschmarks in circulation that have not yet been exchanged for euros. If you want to get rid of the old currency spontaneously, you can now take part in a summer campaign organised by the Bornheim-Mitte e.V. trade association. From August 1, it will be possible to pay with D-Mark again in some shops on Berger Straße.

Until August 31, you can then get rid of old notes and coins without loss of value at the official exchange rate of 1 Euro = 1.95583 DM. Change will then be given in the form of a voucher. Following shops participate in this special D-Mark exchange action: